It’s quite a sight to see—fresh mulch and tiny seedlings in an area that just a few months ago didn’t grow anything but weeds. But the new Billy Earl Dade Middle School Community Garden is sprouting more than just plants: it’s growing partnership and responsibility between the school and the surrounding area.

“This is such an exciting time,” Superintendent Dr. Michael Hinojosa said at Friday’s garden ribbon cutting ceremony. “It’s always a good thing when a school steps up to implement a new way of creating community and leadership.” 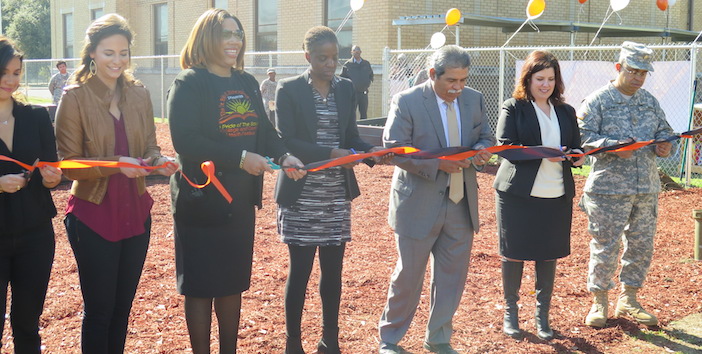 The garden concept has been an ongoing process that involved many conversations between the school leadership, the Leadership Cadet Core, and the creators of the garden idea, Rachel Kolm and Kayla Valis.

“We are so happy that what started as just an idea for a school project actually grew into a real concept that will benefit the school,” said Kolm, who is in graduate school at U.T. Southwestern for dietetics.

“We would have never imagined that it would get this far, but we are very grateful that it did and that so many have come out to support this initiative,” added Valis, who is in the same dietetics program.

Student cadets from Dade led visitors, supporters, and district officials, including the school’s trustee, Bernadette Nutall, to explore and visit the garden.

An exciting concept about the garden is that much of what is grown and sowed will then be harvested and transported to the culinary arts program at Lincoln Magnet Center, Dade’s corresponding high school. Lincoln’s culinary program is one of the district’s CTE (career and technical education) programs and has been featured in several articles and TV stations.

“Words can’t express what this means to our community to have a collaboration like Billy Earl Dade and Lincoln working together through this garden to grow our community,” Nutall said.