The confidence of Dallas Independent School District school-level employees in the direction of the district is at its highest level in two years, according to the most recent climate survey.

On the Fall 2015 Campus Climate Survey, the percentage of school staff believing that the district is moving in the right direction is now at more than 63 percent. The response marks a nearly 15 percentage point increase from the response to the same question in Fall 2014.

“To be successful in supporting students, we need the buy-in and support of our school staff members. We are pleased our teachers and principals are in agreement with the direction of the district,” Superintendent Michael Hinojosa said. “We still have much work ahead, but these results are encouraging.” 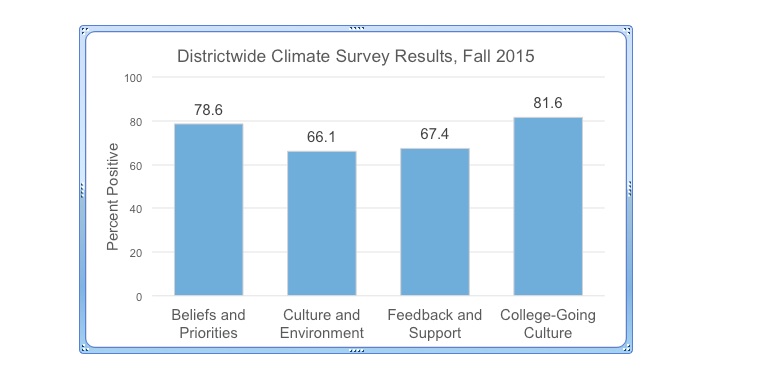 The results are compiled from the 13,204 campus-based employees who took the school staff survey this fall. The survey is designed to gather feedback from teachers and school administrators on how they view the climate in the schools and district. The results are also a contributing factor in campus principals’ performance evaluations.

For the first time in the survey, Dallas ISD sought employee feedback regarding the cleanliness of their campus and if they would recommend their school to parents.

Nearly 78 of respondents felt their classroom was cleaned satisfactorily daily, while 65 percent of employees surveyed said they would recommend their school to a parent.

School morale also improved by three percentage points from one year ago, 57.4 percent compared to 54.7 points.

The district has administered the climate survey in the fall and spring semesters for the past four years. The survey, which is administered by Texas A&M University, is completely voluntary and anonymous.