Kaiyah Jones spent her senior year excelling academically, at work, at track and at motherhood.

Despite working past midnight on a regular basis, the recent W.T. White graduate finished her school year with strong grades and as an acclaimed track-star who earned an athletic scholarship.

“One of my biggest track accomplishments was running a lap (400 meters) in under a minute,” she said. “I was able to finish school, work, go to practice early in the mornings, and still make good grades and do everything right. I had a baby last year and still participated in Cross Country, came to practices, went to every meet and graduated.” 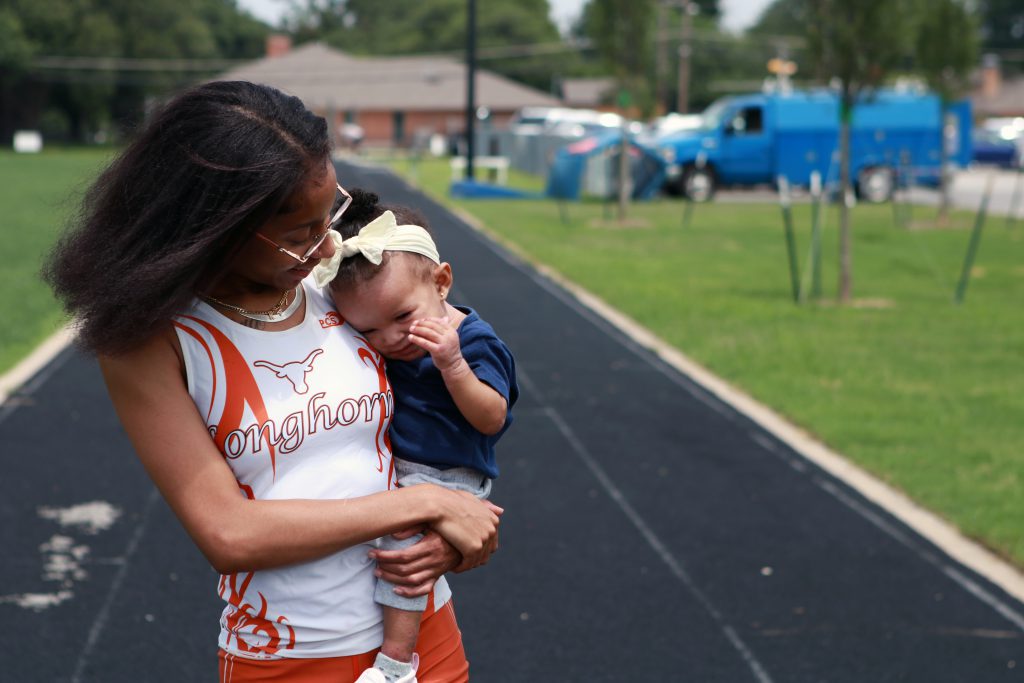 Jones ran with the team that qualified for regionals in the 4 × 200 and was part of the Longhorn squad that won District Champions in the 4 × 400 (two track competitions in which teams of four athletes run a relay race where each runner completes 200 meters or 400 meters, depending on the event). Individually, she placed as a district finalist in the 800 meter-race and is a two-time regional qualifier in the 400-meter dash.

Coach Michael Martin has taught physical education at W.T. White for 17 years and has led the Longhorn Girls Track team for the last 13 years. When he met Jones during her sophomore year, he was amazed by her attitude of relentless self-improvement. He noticed that she had a great work ethic and a natural gift of leadership.

“She’s a nice kid. We never gave up on her and she never gave up on us,” Martin said. “She practices hard and is one of the athletes who gets her teammates to practice. And as a student, she did what she was supposed to do, took charge of a tough situation and did the best she could. Her efforts paid through, because she ended up getting an athletic scholarship.”

Jones relentlessly kept her grades up, worked long hours into the night and continued to support her team, even throughout her pregnancy and after giving birth to her daughter Legacy in July 2020. 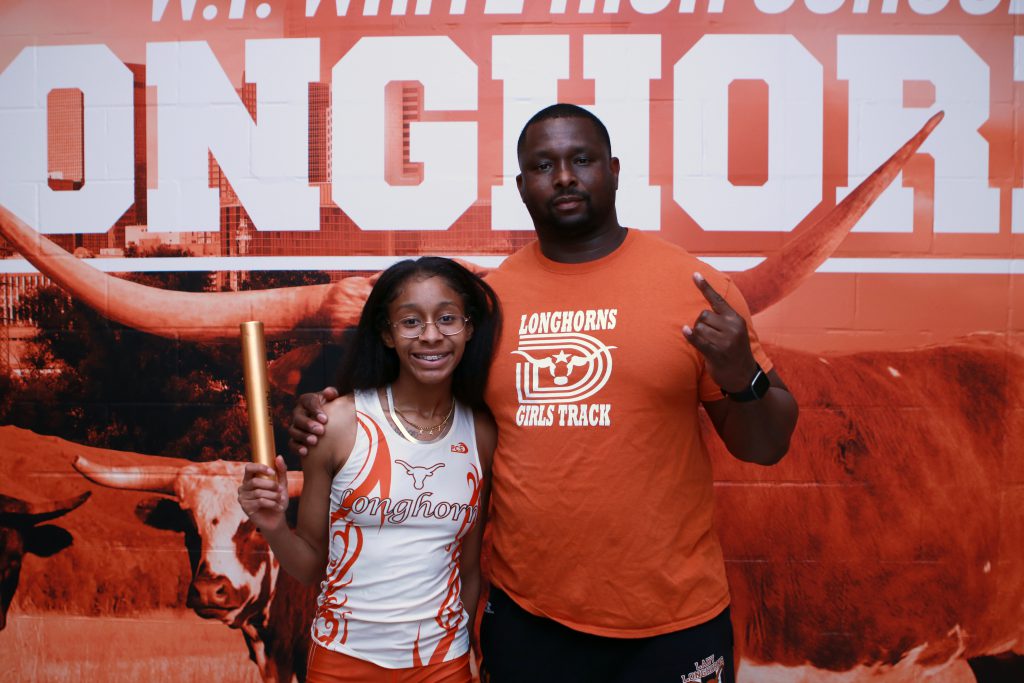 “I was working at a movie theater, and I was always the night person,” she said. “My shift would start almost immediately after leaving school, and sometimes I wouldn’t get out until 2 a.m., depending on when the last movie ended. I’d go to practice for Track and Cross Country the next day at 7 a.m., every day, and do it all over again.”

A second chance to shine

Three months into her pregnancy, Jones realized that she wasn’t able to run as well she normally could. She had not told anyone at school that she was an expecting mother, and she knew that having a baby meant giving up athletics for a couple of months.

“It was really hard to stop running,” she said. “I loved working out, I loved practicing with my friends and being part of the team, so much. I didn’t want to miss out on anything.”

She gave up the sport until after Legacy was born. And while she wasn’t able to continue breaking her personal records and pushing her endurance in the 400-meter track, her coach found another area where she could continue supporting her team and excelling.

Jones became the team manager, and helped her teammates anywhere she could, from getting water for the runners to helping the freshmen improve their times. After Legacy was born, Jones was back on her feet, with her running shoes on and one goal in mind: graduating and going to college. 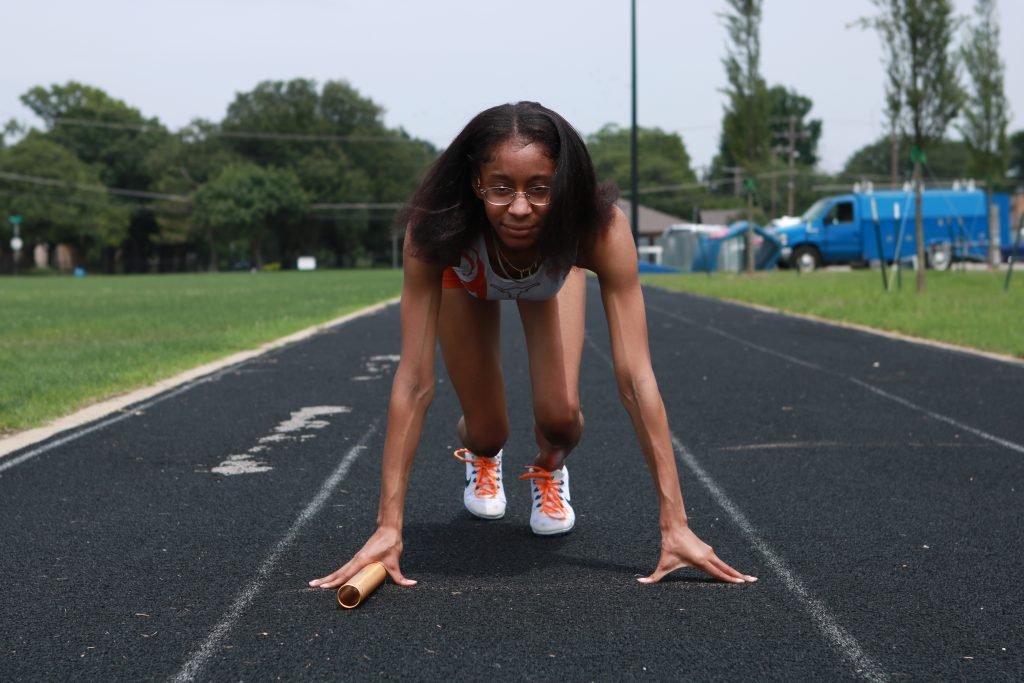 “When she told us she was pregnant, we embraced it. Her family, her teachers and I did what we had to do to get her through, and she did the same. I told her: ‘We’re going to get you through this, but we’re not going to let you quit,’” Martin said. “There was a lot happening at once, especially for her at 18 years old. There were ups and downs, and a lot of emotions. But we worked it out, and we all agreed to get this young lady to the next level, because she had the talent and she persevered.”

Jones wants to become a police officer and is set to start college – with a partial athletic scholarship – at the University of Southwest in New Mexico in the Fall of 2021. She will major in Criminal Justice and run for the Mustangs’ women track and field team.

“Something that I’ve learned at W.T. White and being part of the Longhorns is that giving up is a mental thing,” she said. “If you give up mentally, then you’re going to give up in every other aspect of your life. And the only person who can make you quit mentally is yourself.”

Attendance for Credit letters to be sent out Sept. 22