When Julia Ford was preparing her song at the Texas Thespian Festival in November, she was facing a serious problem. 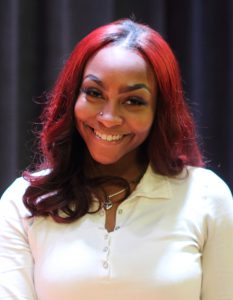 “My voice had left me, and I’m singing, and I thought, ‘This is not going well,’ ” recalled Ford, a junior at James Madison High School. She quickly made some adjustments to her performance and starting drinking hot tea to soothe her vocal cords.

When it came time for her to perform before the judges, they knew she was struggling a bit but commended her for making the changes and overcoming her vocal hurdles.

That performance of “I’m Here” from The Color Purple put her in the Top 24 of performers and stamped her ticket to the national competition next summer at the University of Nebraska. Only performers who earn perfect scores from at least three of the four judges advance.

Ford enjoys being in the spotlight, on stage and on the sports field. She has played volleyball, softball, basketball, golf and ran track for Madison. She especially loves performing on stage, though, and has her sights set on a career in the entertainment business.

She said “I’m Here” is a special song to her.

“When I heard it, it just touched my heart in a whole other way,” Ford said. “A song is a song. But if you connect with a song spiritually, emotionally, with passion – it’s going to be good if you sing it from the heart.”

“The kids here have the utmost talent,” Moore said. “I’m at a loss for words. It is by far some of the best children I’ve worked with in 12 years.”

This is his first year at Madison, a school he chose to go to because of its reputation for having a solid theatre program. Moore said there is a misconception that neighborhood schools don’t offer high-quality fine arts education, but he said that isn’t true. He had a similar experience at his previous job at L.G. Pinkston High School.

“Through her support, coupled with the vision and experience of Mr. Cody Moore, the theatre program at James Madison High School is quickly emerging as a leader in theatre education and production,” Harrah said.

Besides Ford’s performance in front of thousands of theatre educators at the Texas Thespian Festival, Harrah noted her opportunity to perform alongside Shoshana Bean, Matthew Morrison and Jane Lynch on the Dallas Summer Musicals stage.

“She has an incredible voice and talent,” Harrah said. “It is only made stronger through the support of her family encouraging her love for music and theatre every step of the way.”