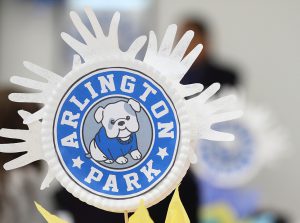 Dallas ISD’s Arlington Park Early Childhood Center may be the district’s smallest campus, but that’s OK because its students are also among the smallest.

The school is the only one in the district to serve pre-kindergarten students exclusively. It opened in August and currently accommodates 103 pint-sized 3- and 4-year-old students in its all-day program.

Principal Enrique Escobedo, who also leads nearby Obadiah Knight Elementary School, said it takes a special kind of teacher to spend the day with 3-year-olds: someone who is patient, humane and loving.

The diversity of the school – the students speak at least 10 different languages – is seen as an asset. “All children can get along regardless of where they came from, regardless of the language they speak,” he said.

He introduced Assistant Principal Maryann Rodriguez, who oversees the day-to-day operation of the school, who called the work she’s able to do at Arlington Park a blessing.

Executive Director Clarita Rivera said students who enroll in pre-kindergarten begin a path to not only being college-ready, but being college-strong. She thanked school staff for their hard work and the parents for their trust.

“Continue to engage with us,” Rivera told parents. “Continue to be part of our community of learners.”

District 8 Trustee Miguel Solis also thanked staff and also Assistant Superintendent of Early Learning Derek Little for being a champion of the concept at the administrative level.

“I get to cut a lot of ribbons. I’ve probably done more in the past two weeks than in my entire tenure as a trustee,” Solis said. “This is without a doubt, hands-down, the most special ribbon-cutting for me.”

As a former teacher and district employee, he decided to seek a seat on the school board in 2012 to represent District 8, which is physically, ethnically and socioeconomically diverse. As he was knocking on a lot of doors to meet residents in the district, he discovered Arlington Park for the first time and learned a few things about the community.

It has a proud and rich history, developed by African American veterans who served in World War II. Just down the street is the former home of Sam Tasby, a parent whose lawsuit was the impetus for desegregation in the district.

He also found residents who were upset that their longtime neighborhood school had closed. “They wanted something to happen at this very location for kids,” he said.

Various forces aligned, including strong support from a community with high expectations and funding provided by the Bridge Plan, a program that made money available between the 2008 and 2015 bonds for priority construction.

“The vision for Arlington Park Early Childhood Center emerged, and here we are today,” Solis said. “This is what early learning and pre-K will look like in the future of Dallas ISD.”

Altha Ingram, an Arlington Park resident and volunteer at the new school, has a grandson who attends. She volunteers during lunchtime a few times a week, she said, because it is the responsibility of parents and grandparents to be involved.

“We have to make sure the little people grow up to be responsible, respectable adults,” she said. “We are all part of their village. We all have to work together.”

The future of pre-K

Early in the process, Little recalls Trustee Solis asking him how enrollment was going at Arlington Park. “We had two on that particular day,” he said, noting that with 103 students, the school is now at capacity for 3-year-olds.

He said about a third of the students live in Arlington Park, while the rest come from across Dallas ISD. There has also been interest from families outside the district. Some of the children have parents who work at one of the nearby hospitals.

Three students led the Pledge of Allegiance and Texas Pledge at the beginning of the ceremony. “They don’t develop into that without the work of their teachers and the folks who are in their classrooms every day,” Little said. “Our commitment to you is that this continues to be the best place for pre-K in Dallas ISD. This is a promise for decades to come.”

Amber Scanlan from business partner PNC Financial Services said her company has an early learning initiative to support children ages 0-5 called “Grow Up Great.” Citing scientific studies, she said the early years are important because research suggests that 90 percent of brain development happens by the age of 5.

“In the first five years of life, it is the most important time to set them on a path to success,” Scanlan said. “This school is one of the most innovative investments in education,” she said. “We’re so proud of all your work.”

So far, PNC has participated in Principal for a Day, among other things. She said the company is now working to provide a financial gift to allow teachers to fulfill some of the new school’s needs.

“Thank you for letting us be here, and we’ll be here a lot,” she said.

Getting a head start

Tim Strucely, executive director of Dallas ISD Construction Services, said the new school cost $4.5 million. “It is a small amount of money to build such a high-impact facility,” he said, also thanking the community for their patience during the construction. He also noted that the dedication plaque from the original Arlington Park Learning Center was preserved and installed in the new building, and the “Arlington Park” letters on the front are from that first building.

What happens inside the building is seen as the most important component of all.

Escobedo said that while pre-kindergarten for 4-year-olds has been proven to help ensure future academic success, pre-K for 3-year-olds makes even a stronger case for giving students a head start.

“They are going to be the most advanced students in the classroom,” he said, adding that students who get a jump on their education are likely to stay ahead of peers.