Robotics teams in Dallas ISD will receive additional resources to foster interest and ability in STEM learning through the help of a $350,000 grant from Texas Instruments Foundation (TI Foundation).

“This grant will also ensure the expansion of robotic teams and opportunities for students to participate in co-curricular and extra-curricular STEM activities in all of our schools.”

Since 2013, Steven Smith and Bart Basile, both engineers at Texas Instruments, have dedicated nearly 800 volunteer hours annually to work with students in competitive robotics at Emmett J. Conrad High School.

“Many of the students at Conrad enter the classroom lacking not only the skillsets necessary to succeed in STEM professions, but also lacking a model for what an adult with those skills looks like,” said Smith. “So for them, the Conrad robotics club often becomes more than just a place to build robots; it becomes a comfortable place to go most days after school, where they can be challenged intellectually in a fun and engaging way that also nurtures teamwork, comradery and confidence.” 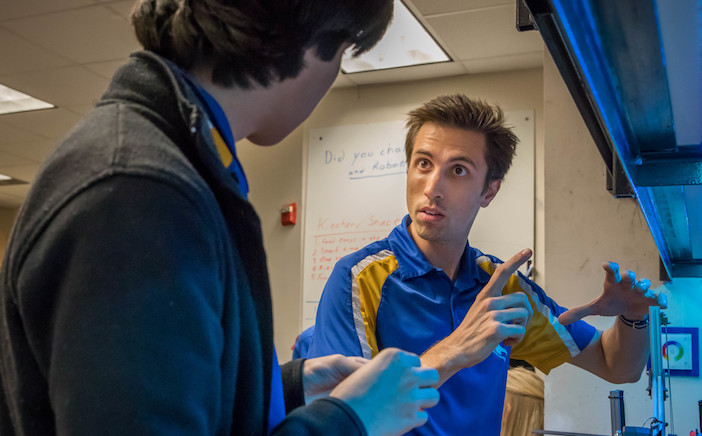 Over the years, Basile has witnessed the transformation of students who were once freshmen with little or no experience in robotics, who are now STEM experts, studying science and engineering in college.

“The robotics program [at Conrad]gives its students an opportunity to achieve STEM success that many of them would never get otherwise,” said Basile.

This year, Dallas ISD has approximately 260 teams from 183 schools that participate in eight robotics competitions. Additionally, STEM interest has grown to include a Special Needs Robotics League, comprised of 10 schools, which has seen a 50-percent increase over last year, to compete in adaptive robotics.

“This investment in Dallas ISD has the potential to pay powerful dividends in the lives of the students who participate in robotics competitions, which are proven to make an impact toward student interest and success in science and math subjects, including desire to pursue careers in STEM,” said Andy Smith, executive director of TI Foundation. “The grant funding from the TI Foundation will allow Dallas ISD to increase the reach of its robotics program and by adding more teams and student participants, in particular those who are traditionally under-represented in STEM studies, such as African-American, Hispanic and female students.”

That’s why robotics mentors like Smith and Basile are integral to the success of the grant’s implementation.

“Once students get involved in robotics, they all walk with their heads a bit higher, having contributed to the team. And on a personal note, I get a profound sense of accomplishment working with these students that my day job just can’t match,” said Basile.