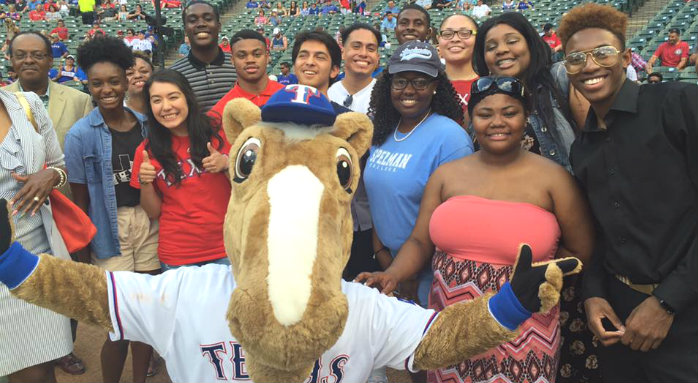 The Texas Rangers’ organization rolled out the red carpet for 13 recent district grads who received $1,000 scholarships funded by Dallas ISD students and employees who contributed to the 2016 United Negro College Fund Workplace Campaign.

On arrival at Globe Life Stadium, the students were greeted by Dallas ISD Trustees Lew Blackburn and Bernadette Nutall. The Rangers kicked off the celebration by inviting the students to watch batting practice and meet the players. Next, the team hosted a pregame recognition ceremony during which Trustee Blackburn escorted the honorees onto the field where they were honored for their academic achievement. The special day culminated with a reception in one of the team suites where students enjoyed snacks and cheered on the home team.

Congratulations to the 2016 UNCF scholarship recipients who are headed to a variety of colleges and universities.