A loving mother, a team of teachers and coaches, and a ninja from an anime franchise inspired a student who struggles with dyslexia to improve his reading skills, become an exemplary athlete and overcome emotional distress.

Despite living through a domestic conflict during his sophomore year, Arza Brown never lost focus of his personal goals throughout high school, graduating from Moises E. Molina High in 2021 and earning a prestigious scholarship to West Texas A&M University.

“I was really messed up inside and I didn’t know what to do. My coaches and my teachers noticed I was going through something and helped me find a way through it,” he said of the turmoil in his home. “The effort I put forth helped me cope and fight through these stressful situations and build stronger relationships with my team.”

Brown has struggled with dyslexia for as long as he can remember and his mom has always been his biggest supporter. Growing up, his mom would help him practice the alphabet often and would buy and read Dr. Seuss books with him. When he started middle school, she hired a private tutor who specialized in teaching students who struggled with dyslexia. 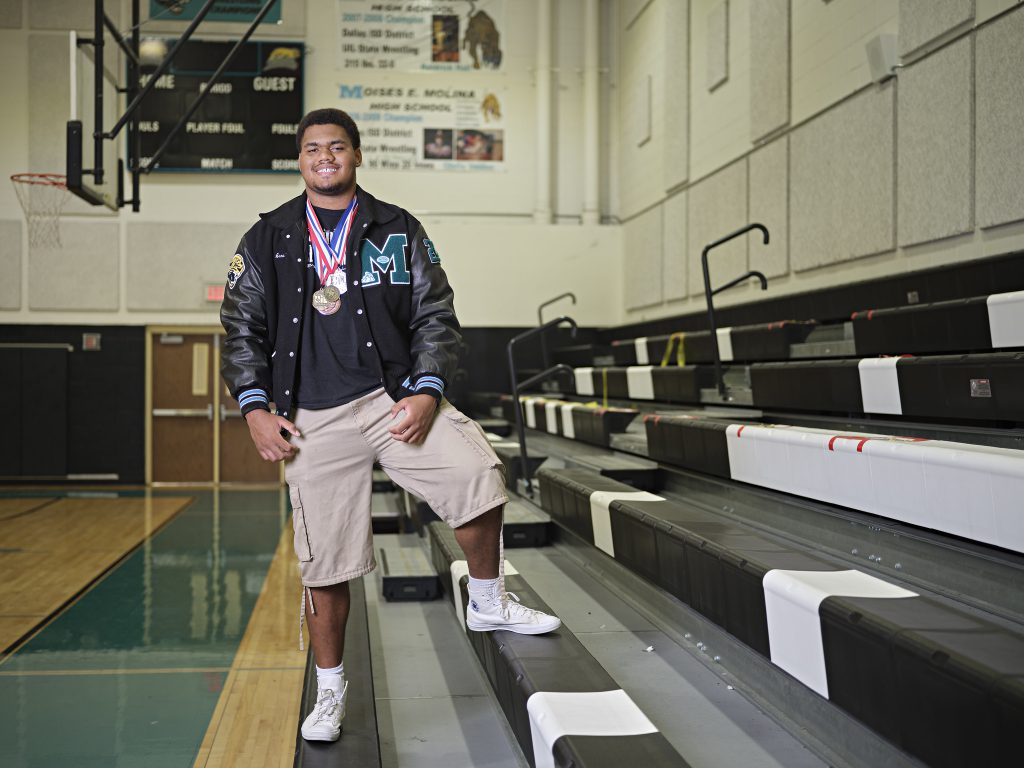 “My whole life I’d be looking at English words, and to me it would look as if it was written in Chinese,” he said. “I even struggled to read short words, like ‘anger.’ In my brain it’d look like the longest word in the world.”

When Brown started high school, his tutor began working hand-in-hand with Molina educators to help him improve his reading and writing. Brown would arrive to his English classes early and his teachers would give him the material for the day. He practiced reading before and after school, so that when he had to read in front of the class, he could do so without difficulties.

His teachers would give him literature that he liked and would read a few paragraphs with him. He liked the stories so much that he’d read the rest in his own time.

“We’d get to a stopping point, and I’d be eager to know what happens next, and I’d take the book and pick it up at home,” he said. “Overtime, the more I kept going at it, the more I broke through the barriers. During my senior year, I was able to stand up in front of my classmates and read it proud and out loud, without stuttering or anything.”

A deep love for reading, despite his challenges

Like many characters in anime (animated series, usually produced in Japan), Brown is a young man who learned about himself and developed his full potential in the face of adversity.

Aside from his athletic commitments to football and wrestling, he’s been an avid fan of anime since middle school and was an active member of Molina’s Anime Club. While he really enjoys TV shows like Naruto and Demon Slayer, his life changed when he found Manga, the comic books and graphic novels that the cartoons are based on. 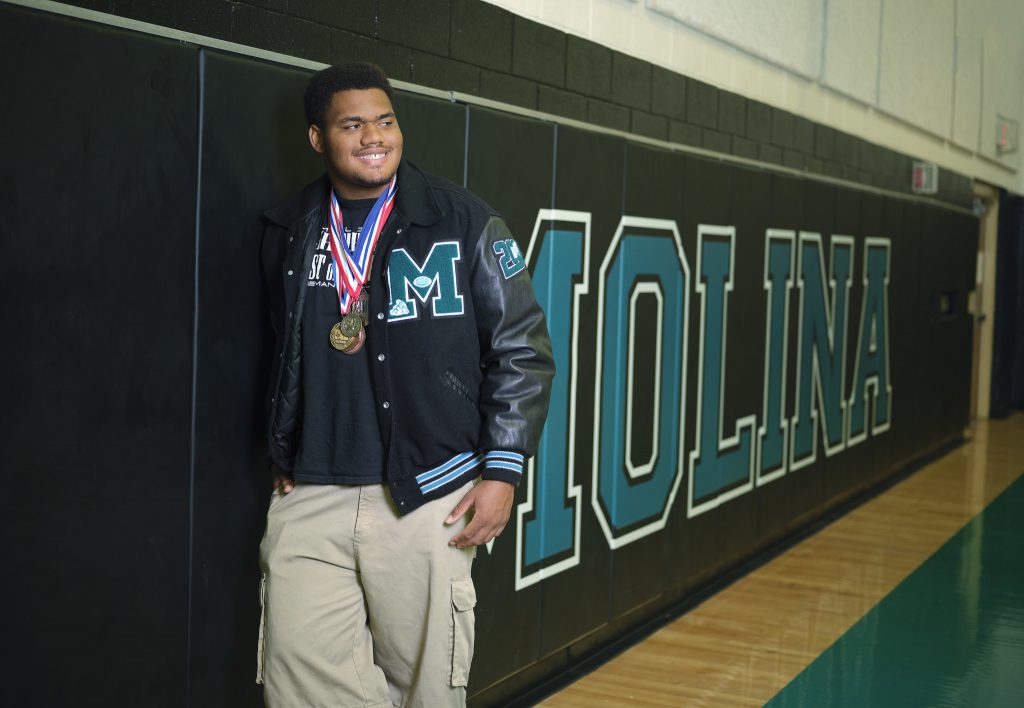 “I started reading Manga before reading anything else.,” he said. “I was a big Naruto fan when I was in middle school. I visited a huge bookstore once, and I saw a sign for an Anime / Manga section. I went there expecting to see DVD’s and that’s when I realized that Naruto had a huge book series. I saw all the books available and I thought, ‘I don’t know how to read, but I’m interested and I’m going to try to pick it up.’”

Since then, he has read countless volumes of Death Note, Naruto, Black Clover and Fire Force. Once he found Manga, an activity that once seemed nearly impossible became a hobby and a way to sharpen his skills.

“I felt like it was a magic book because I started without being able to read, and later I was able to read those like they were nothing,” Brown said. “Sometimes I read from right to left, and it was a lot easier for me to read because Manga graphic novels are already read in that direction. I could read through all the pages faster because the pictures gave me a better context to understand what I was reading.”

Along with improving his reading and writing skills, Brown set his own athletic goals. During his sophomore year, he joined Molina’s wrestling team and played football as an offensive and defensive tackle. He was a three-year starter for both teams. In wrestling, he qualified for regionals in his junior year and placed sixth in the UIL State Tournament as a senior. In football, he was part of a team that improved and won more games every year that he played. 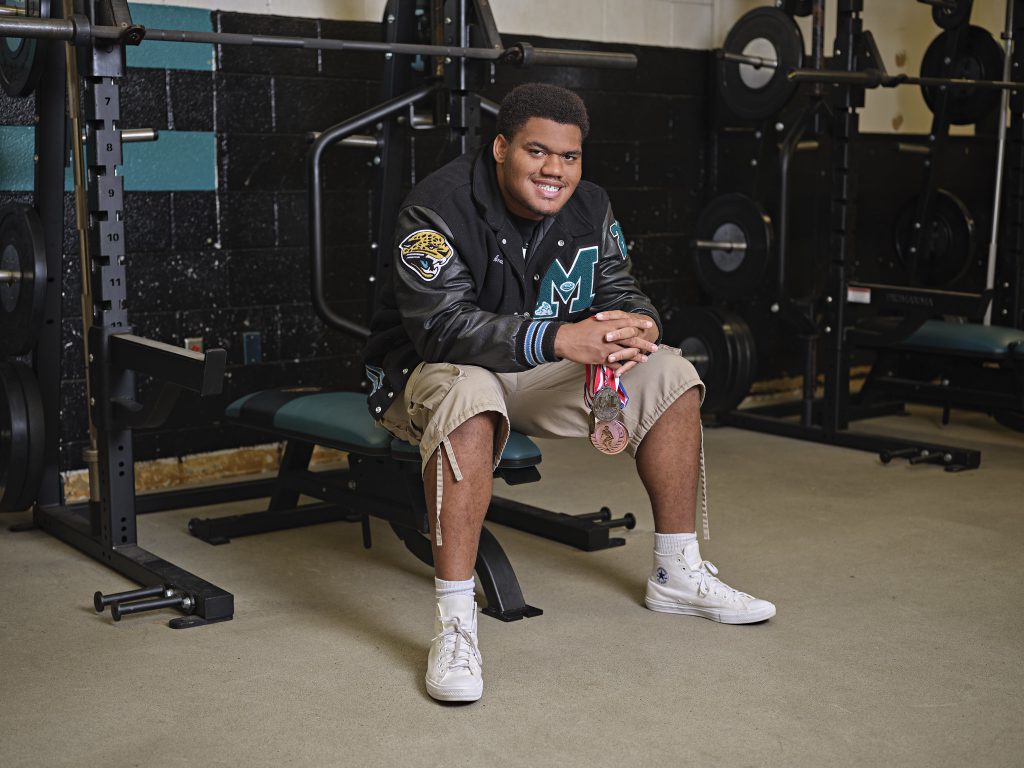 He recalls a day in the weight room when, on the second try, he was able to lift 315 pounds on the bench press without the help of a spotter: “The entire weight room went crazy! Coach Mills gave me that good-job look, and everyone was so happy for me. That was my proudest moment in high school.”

In the Fall, Brown will start his first semester of college at West Texas A&M in the Fall, where he will play for the university’s football team. He will study business, and will join his sister as a first-generation college student.