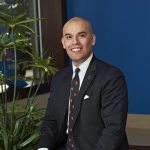 At the age of 27, Miguel Solis was elected to the Dallas ISD Board of Trustees in 2013 and has since been re-elected twice. He recently announced he will not seek reelection for his District 8 seat, which represents Love Field, Northwest Dallas and Central Dallas.

During his tenure on the board, Solis has served as President and Vice-President, making him the youngest ever to hold these positions. His efforts on the board have included drafting and unanimously passing the district’s first early childhood education policy; drafting and unanimously passing a ban on out-of-school suspension for the district’s youngest children, which has now become state law; co-drafting the historic racial, socio-economic and educational equity resolution, leading to the unanimous approval of a comprehensive racial equity policy and department; and helping to create the district’s revolutionary teacher excellence evaluation, support, and pay system among other initiatives.

Solis also currently serves as the executive director of Coalition for a New Dallas, which is working to remove the physical and economic barriers that have divided Dallas neighborhoods, reinforced segregation and stifled economic opportunity. Solis’ professional experiences also include serving as a staff member on President Barack Obama’s historic 2008 presidential campaign, a Teach for America public school teacher, and Special Assistant to the Superintendent of the Dallas Independent School District (Dallas ISD).

Solis is a native Texan who received his B.A. in history with a minor in political science from Lamar University and his M. Ed. in education policy and management from Harvard University.