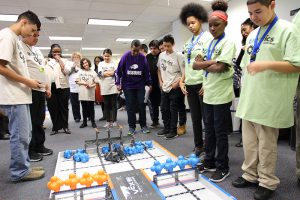 As part of an effort to meet the district goal of every student engaging in a co-curricular or extra-curricular activity, the Dallas ISD Student Activities Department, Special Education Department and STEM Department hosted the district’s first ever Special Needs Robotics Scrimmage.

The teams faced off with their VEX IQ robots, aiming to complete as many tasks as they could in two minutes. They used the robots to move around large blue or orange plastic balls. Each team had two drivers who would switch at the 1-minute mark during a round. The robot kits are assembled and maintained by students as well.

A second Special Needs Robotics Scrimmage will be later this year.