From the curb to the classroom, the Dr. Billy Earl Dade Middle School reminds every passerby and guest, and every student, parent and educator that Dade is Home.

Friendly greetings from the front office and enthusiastic voices of educators and students echo in Dade’s luminous hallways. The white overhead lights that reflect on the waxed floors contrast with the black and bright-orange decorations displayed in every hallway that cause the 600 Dade Vikings and 41 staffers to beam with pride.

Only seven years ago, this South Dallas campus was home to abysmal staff turnover and deep behavioral issues, and was deemed low-performing by the Texas Education Agency (TEA) for three years in a row. Now, Dade has earned a “B-83” rating on the state’s 2022 Accountability Rating System, and Dallas ISD’s Local Accountability System calls it a “Breakthrough Campus” with one of the highest-rated climates and school cultures districtwide. 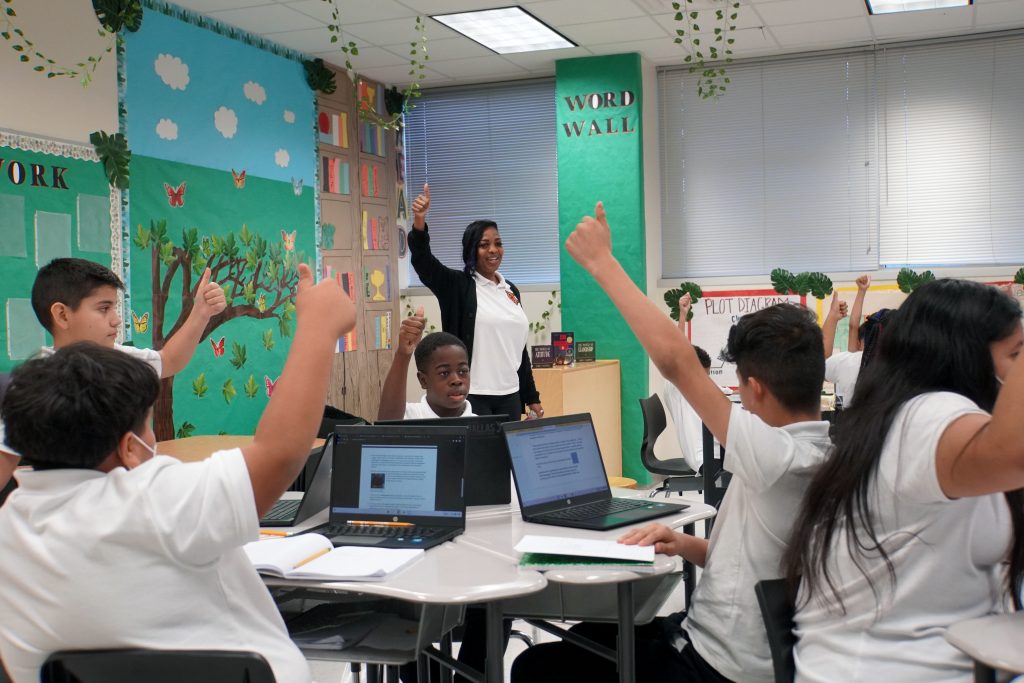 “The district closed Anderson in 2013 and sent all the students to Dade, which became the home of two rival middle schools that served two different zip codes and fed into two different high schools,” Stewart said. “The work, to turn around and transform a school where kids might have been allowed to behave a certain type of way and were getting in trouble often was challenging, to say the least.”

In 2015, the district recruited Stewart – along with a team of elite, like-minded educators – to support a pilot program designed to fix low-performing schools as an assistant principal at Dade.

ACE, which stands for Accelerating Campus Excellence, has become Dallas ISD’s most successful initiative to boost student achievement in the highest-need campuses. Dade was part of the first ACE cohort seven years ago and is one of the schools that helped build the foundation of this exemplary program.

Under ACE, the district incentivizes top teachers and principals to voluntarily work at the district’s highest-need schools. The program combines strategic staffing, effective instruction, positive culture, extended learning and collaborative partnerships implemented in a culture of high expectations. Most ACE schools turn around within one year and stay in the program for three years before they bridge back to their geographic feeder pattern.

Tracie Washington, who currently serves Dallas ISD as executive director of middle school strategy & innovation, was the Seagoville Middle School principal at the time Dallas ISD wanted to address the issues at Dade. When the opportunity arose, she met with then-superintendent Mike Miles, who asked her to build a team and recruit teachers who could support the mission of transforming the school. 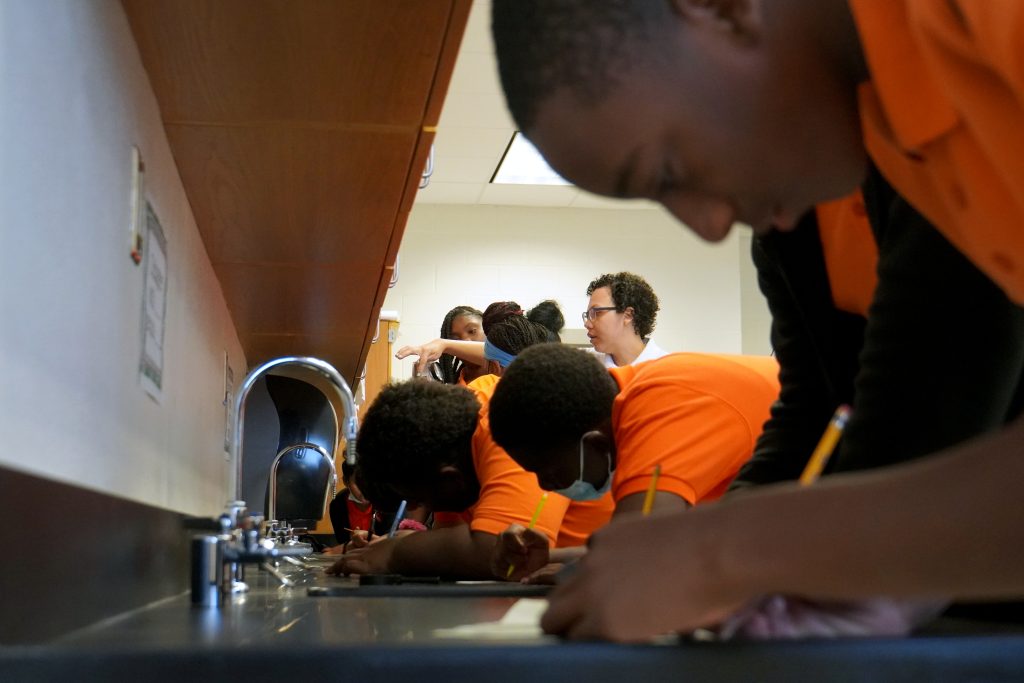 “ACE works because it is an intentional effort to recruit and incentivize like-minded people,” Washington said. “We had a true opportunity to be honest with the scope of the work: that this was going to be the most challenging and the most rewarding work of anyone’s career. I had the very best teachers, not measured by metrics, but because of their belief system and their grit, and because collectively, we would honor commitments and give the kids the experience of their life.”

Seventh-grade Texas Studies educator and Dade’s Teacher of the Year Marquis Barnes-Wheeler is among the former Seagoville Middle School teachers who joined Washington at Dade. Like Stewart, Barnes-Wheeler is a product of South Dallas who attended Pearl C. Anderson and later graduated from “The Great” James Madison High. He’s been part of the Dade family since the transition, and for the last 10 years has volunteered to coach at his high school alma mater,

“I wrestled with the decision, just because I knew the kind of environment I was going to be thrown into,” Barnes-Wheeler said. “I gave it a lot of thought and a lot of prayer, thinking about what I could contribute to this change. I knew I had to come, because if I don’t do it, being from this community, who else is going to do it? I had to come and give back to these kids, because they deserve everything that anybody from other environments has. These kids deserve that, too.”

“From the curb to the classroom”

Like Barnes-Wheeler, Dade’s PLC Facilitator and Culture Coordinator Vonda Pipkin is a former Seagoville Middle School staffer who followed Washington onto the Dade frontlines. Ever since, she’s worked alongside Stewart at Dade and Dr. Martin Luther King Jr. Elementary (another South Dallas ACE success). Under Principal Stewart’s leadership, MLK’s earned the highest-rated positive climate and culture in the district and went from a “D-61” to a “B-81” during the 2018-2019 school year.

For the last seven years, Stewart and Pipkin have placed a heavy emphasis on climate and culture because they’ve found it to be a key factor in turning struggling schools around. The aligned belief and strategy that Stewart and Pipkin implemented, both at Dade and MLK, emphasizes that when teachers and staff feel appreciated, the kids feel it, too.

Dade implemented a house system where every student, teacher and staff member belongs to one of three teams and scores points based on attendance, achievement, behavior and character. Every other Wednesday, administrators check on their teachers and encourage other teachers to check on each other as part of Wellness Wednesdays. Every staff birthday is celebrated and every appreciation day is honored. The leadership team often visits classrooms to cheer on the teachers while coaching in the moment and building inspiring relationships. The success of these strategies are reflected in the 2022 Local Accountability Rating, where Dade earned a 96.1% positive response on its Campus Climate Survey and a 93.4% positive response on its Parent/Guardian Satisfaction Survey.

“When we saw that the heat was being turned up for expectations, there was a need to turn up the love even more,” Pipkin said. “Climate and culture is not just one thing, it’s everything, from the curb to the classroom. When you pull up in the parking lot, is the grass cut? Does the school look warm, welcoming, inviting? When you enter through the doors, are you greeted? It starts with showing love and appreciation and valuing others. It is not one thing, it is everything that we do daily.”

ACE through the years

Jolee Healey, a Dallas ISD educator with a 30-year trajectory, serves as deputy chief of priority schools and leadership development. She spearheaded the inception of ACE in 2015 by identifying high-performing principals and teachers, then inviting them to restaff and transform low-performing schools.

“ACE demonstrates the district’s commitment for equity by giving a significant amount of dollars to fund this program and support in the schools that need it the most,” Healey said. “We’ve gone from seven schools in the initial cohort, to 23 schools. We have many ACE schools and ACE graduates that earned a TEA “B” rating and multiple distinctions. Many of these serve as models for other schools, and we’ve developed instructional tools and data practices that have been scaled across the district to help all schools.”

After ceasing to be deemed a low-performing school in the TEA’s Accountability Rating and earning acceptable ratings for three consecutive years, ACE campuses graduate from the program and return to the supervision of their regular feeder pattern executive director. Since its initial implementation seven years ago, 15 schools (including Dade) have graduated from ACE.

Healey partners with Damien Stovall, executive director over ACE schools and former principal of an ACE school that graduated from the program and reached Blue Ribbon status. Stovall works directly with the fourth cohort, with three of the eight new schools that are still striving to meet state accountability. At the state level, the Dallas ISD ACE initiative has been adopted by 19 school districts and approximately 57 schools.

South Oak Cliff Golden Bears recognized by Board of Trustees