On a day-to-day basis, the most important service the team provides is making sure homeless students get enrolled. The department also helps arrange transportation to school, provides uniforms as well as hygiene and school supplies, and makes referrals to additional resources for food, housing, counseling and medical services as needed.

But when there’s a major catastrophe, such as the recent collapse of an apartment building in Southeast Dallas, or last winter’s storm, or the pandemic—whenever students are displaced—the Homeless Education staff serves as vital connectors.

“We connect families to resources,” Marshall said. “And we try to train people at the campus level on how to find resources. We also want people to advocate for themselves.”

Indeed, as the district marks Homeless Youth Awareness Month in November, Marshall’s main goal is to let homeless families and students know that it’s okay to let their situation be known and to ask for help.

“How do we get our kids and our families to know that it’s okay to advocate for themselves and tell us their situation? I used to always say we’re  only one paycheck from being homeless. And then the pandemic really drove that home,” Marshall said. “Suddenly, people who never had to ask for food were out there in line with hundreds of other cars, waiting for that box of food. The pandemic shone a light on the fact that there are homeless families in Dallas.” 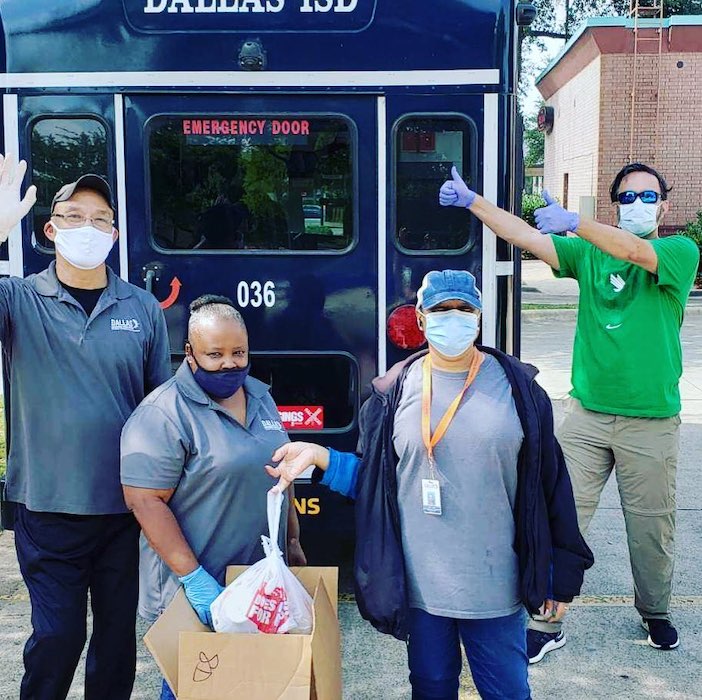 Last year, the district counted 4,400 students as homeless, the most Marshall has seen in her six years on the job, and that could be an undercount, she says, because, “A lot of them just don’t say.”

A former special ed teacher, before taking on her present role, Marshall also spent 10 years working as a supervisor at Dallas ISD’s Hospital Homebound program – which provides education in a home or hospital setting for students whose medical needs prevent campus attendance.

Who are the homeless?

The biggest group of homeless families in Dallas are those living “doubled up,” with more than one family together because someone can’t afford to live on their own.

“Although that is 75% of our students who are coded as homeless, I think it’s probably more. Some people look at that situation as a cultural thing rather than homelessness.  I’ve talked to a lot of adults who’ve said, ‘well, that means I was homeless when I was younger, because we had to go live with my grandparents.’ Yes, you were, but you just didn’t think about it that way.”

The next largest group would be people who are in shelters. “In Dallas, we have a lot of shelters, so we have a lot of families coming to Dallas to be homeless – because we have more housing  than Irving, for instance, or McKinney, or some of the surrounding school districts. “

The next group would be families in hotels/motels.  “Family Gateway, a shelter downtown, is currently out of room in their shelter, so they’re putting a lot of people in hotels and motels around the metroplex,” Marshall said. Gateway also provides transitional apartments and puts folks in hotels until they can get into an apartment and some more permanent form of housing.  Currently, there are families living in hotels near Market Center, some by Love Field, and in other locations.

The final group is the unsheltered homeless. These might be older students who are “sofa surfing” and staying with friends during the week. Often, those families ask these teens to leave for the weekend so the family can do things together, and then come back during the week.

In addition, there are families who live in their cars or in abandoned buildings. The district also has some students who struggle with mental health issues and are not med-compliant. “We worked with a couple of students for years, and that just happened to be their choice. They would rather sleep outside than go to a shelter and follow the rules. Sometimes it’s a life choice,” Marshall says.

There are older students living on their own, as well, and some from other countries whose parents sent them here to live with friends to escape danger or poverty in their homeland.

A student who identifies as homeless has 30 days to bring in all the documentation needed to enroll. “We’re trying to create that better relationship, to let school registrars know that families have 30 days to get their immunization records in, and to help families understand on their end that they have to make sure to get those records and bring them back to the campus. A lot of it is just creating better relationships.”

After enrollment, students need a way to get to school safely, clothing and supplies to attend, and referrals for other services they may require.

“A lot of folks come to Dallas to be housed, but the way the law is written those children can remain at their home schools. That means that we—and [the student’s home district]—must figure out how to get that child back and forth. That’s one of those things we try to do to keep some consistency in a student’s life and help the parents. Something as small as making sure that transportation gets set up means the world to them.”

And when disaster strikes, such as apartment fires, storms, or the recent apartment building collapse, Marshall said, “We connect with those families on a social-emotional level to let them know that, though they are in that vulnerable spot, we’re trying to help them.”

“This year we’ve had several apartment fires,” she says. “I know of two apartments that got shot up [by firearms]. We just talked to someone whose apartment flooded; someone else had a car drive through their home. And sometimes, someone just needs a place to take a shower.”

The department of five can’t provide all the resources families need, Marshall said, “so now we’re trying to train schools. How do they get their own food pantry going? How do they get their own Amazon wish list? Some schools, like Woodrow Wilson, have done a splendid job of getting that done. They have their pantry and now they’re helping a lot of other schools in their feeder pattern come up with a pantry. We want to get that education out to folks to figure out what are all the other ways we can get help for our families, and how do we tap into our school community.”

Something else the department does is to make sure parents know that programs like Dallas County Promise are available to help students pay for college, “so they don’t have to graduate and go back into the same situation of possibly being homeless because they didn’t take advantage of some of the great programs we have in the district.”

Overall, Marshall said, “The biggest thing we want people to know is that we’re here. We’ve been here for 20 years. It’s one of those departments where you don’t know you need us until you need us.”