The district this school year eliminated both in-school and out-of-school suspensions for middle and high school students, while still having any serious infraction go through the disciplinary alternative education program.

“Suspensions and in-school suspensions (ISS) never really fixed why some students were continually misbehaving and doing things that got them sent to ISS or suspended,” said Cortez, the Spruce High School Reset Center Coordinator. “Now, we’re actually trying to fix the behavior.”

The Dallas ISD Board of Trustees had already eliminated out-of-school suspensions for students in grades Pre-K through two in 2017. It was part of an effort to do away with an antiquated discipline system that district leaders say does not work for students of color, particularly Black students. The Board of Trustees approved a $50.5 million budget on June 25th that expanded the discipline reform districtwide and increased the salary of eligible employees. 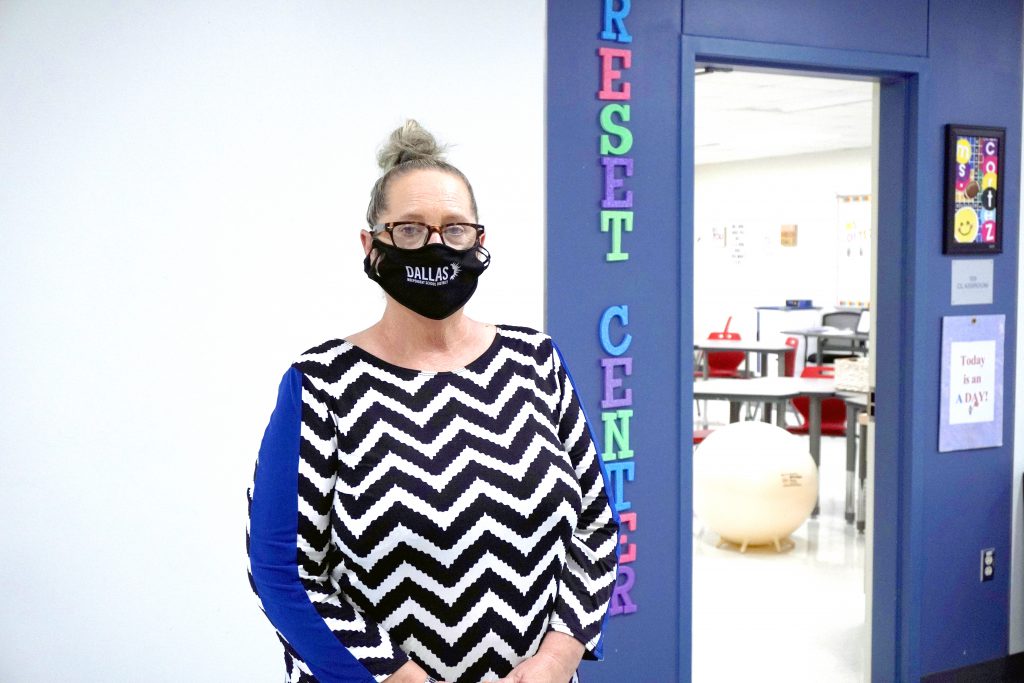 Under the new discipline reform, Dallas ISD established Reset Center Coordinators for all 52 comprehensive middle and high schools. The coordinator works with students who might behave in a way that, in the past, would lead to an out-of-school suspension. Each comprehensive middle and high school also received resources for a Reset Center, a dedicated space for the coordinator to work with these students while still keeping them engaged in their schoolwork and learning.

“We’re figuring out why some students are coming late to school and how we can help with that. We’re asking them why they’re walking out or sleeping in class,” Cortez said. “When they come here, we try to work with them and change their behaviors that would normally get them sent to ISS or suspended.”

Cortez started working at Spruce High as a girls’ basketball coach 29 years ago. She later became the school’s assistant athletic coordinator, a position she held for over a decade, until retiring four years ago. She came back to Spruce as the ISS teacher for three years, until she was offered her current role. We spoke with Cortez about how she prepared for the new position and how the new Reset Center varies from her former ISS classroom.

Why are Reset Centers a better alternative to suspensions and ISS?

Instead of being a one-size-fits-all disciplinary method, we’re providing personalized approaches, which vary depending on the infraction. 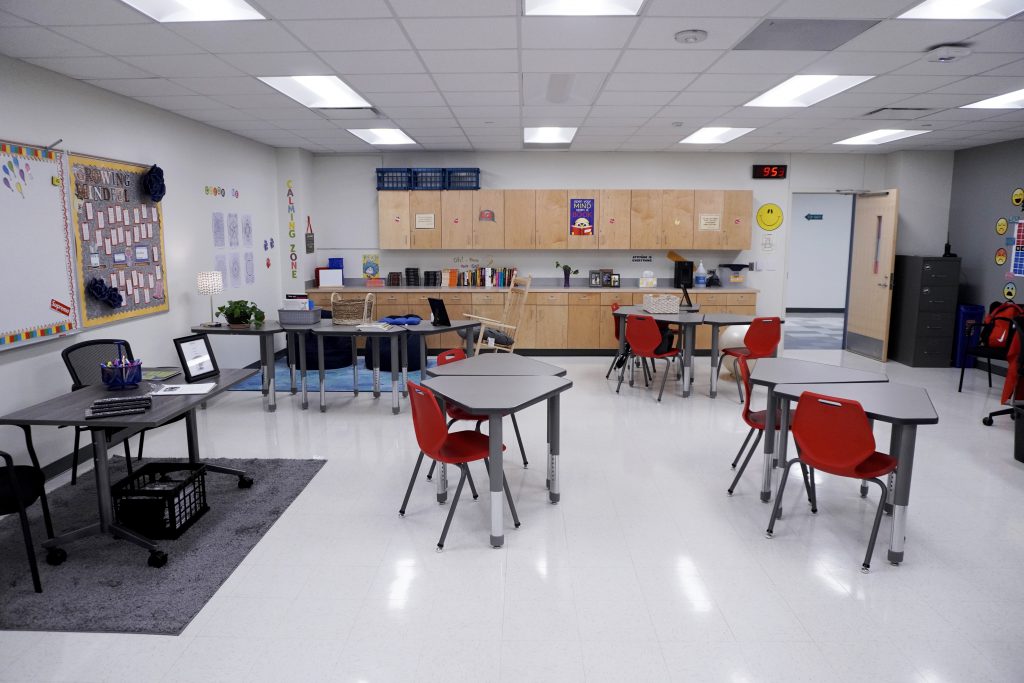 When I get students in here, I tell them why this program exists. I say to them, ‘last year, you would have been suspended for this behavior. Tell me, what would you have done while you were home?’ Many of the students say that they would have slept in, played video games and eaten all day.

When they come back from a suspension there is nothing that was done that was going to change that behavior.

This program is going to be impactful because what we were doing wasn’t working. I think in the long term it will have an impact to actually change these behaviors. I’m hoping that’s what happens.

What does the day look like for a student who gets sent here?

It varies, depending on the infraction, and it also depends on whether the student is having issues in only one class. In those cases, they might come to me just for that class period.

Teachers will send me an email saying, ‘I’m having problems with a certain student. Can you please talk to them?’ Last year, they might have just written a referral for suspension and that’s it. 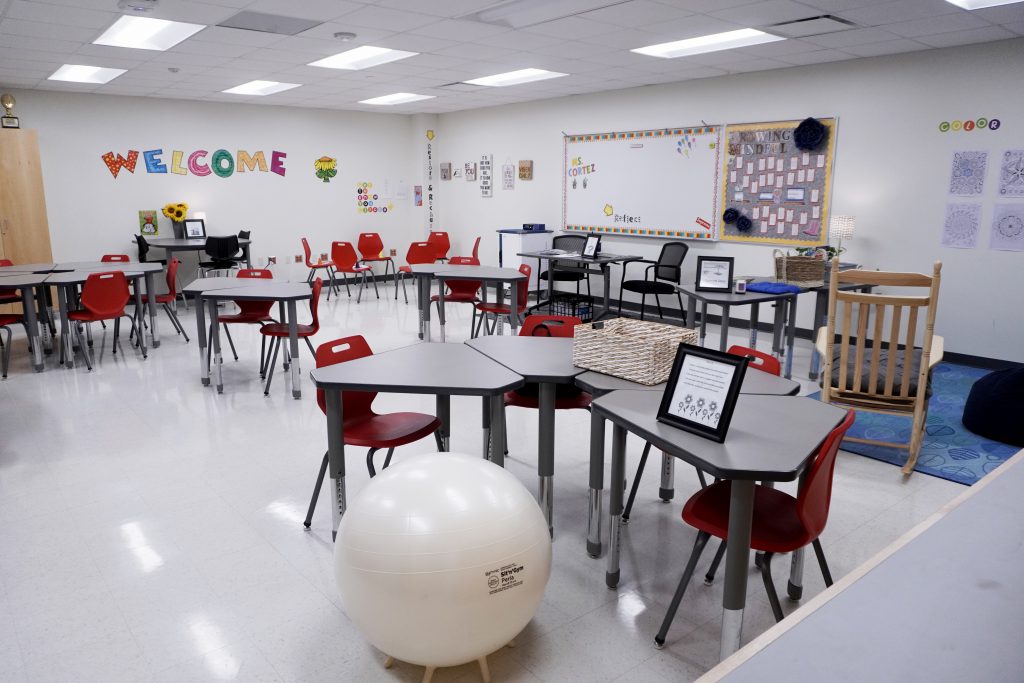 I had a student who was sent here during her third period, who was having some troubles with her third-period teacher, and not in any other class. She came in and we talked about what was going on in that class. The next day, when third period rolled around, I asked her to stay here one more day, so that she and her teacher could get some distance from each other and so that we could figure out a solution to the problem. The student and I talked during the third period, and I offered her some suggestions on how to change things. The teacher emailed me about what she’d like to see different, and today the student went back to her third-period class.

We held a restorative circle with certain rules and guidelines, and we just talked. They told each other how they felt. I had them tell each other something that they liked about their friend. And they just grinned. They were so happy to do that, I knew right then that it could be fixed. I allowed them to talk, and they apologized to each other and went about their day, leaving as friends again. In that situation, I was just trying to restore the friendship.

We spend part of the time working on correcting their behavior, and they also log in to Google Classroom and continue to do their classwork, so that they don’t fall behind.

How was your transition to this role? And what are some things that you are doing now that are different from your previous position?

I was a skeptic about the success of this program at first, and only started believing that this could really work once I started going to the training. 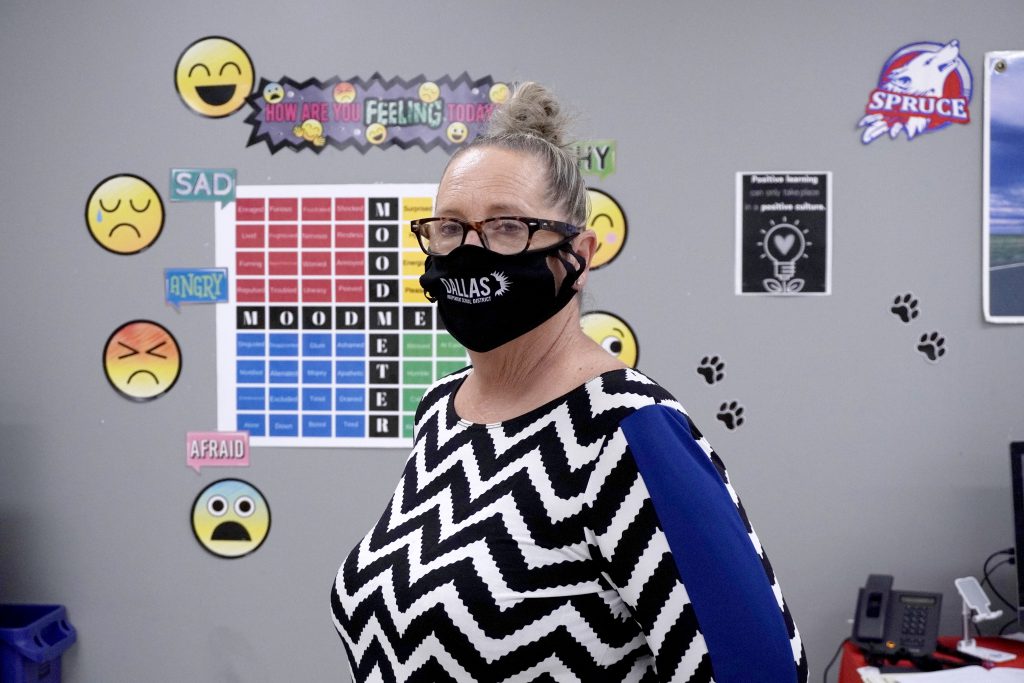 We practiced Restorative Practices and Social and Emotional Learning. One of the first things that I do when a student comes in, I have a mood-meter chart printed out and I ask them to pick one square and put their finger on the word that best describes how they’re feeling right then. That gives me a guideline to where to go next because if, for example, they choose something like “fuming” or “enraged”, there is nothing I can say that is going to matter to them. If they are in the Red Zone — and there have been some students that come in that state — I take them to a Calming Zone in the classroom, where they just do what they need to do for a few minutes, whether that’s listening to music, or coloring or reading. I need to get them from a 10 to a two, so we can talk about what’s bothering them.

That was all part of the training. I didn’t know any of this before, but I do now. After training, I felt prepared and more confident that this could work. You obviously don’t know every situation that’s going to happen until you get there, but that’s part of doing something new.