Fifteen-year-old Zimaya Propes fits the description of a natural-born athlete. Throughout her school career, Propes has played basketball, volleyball, and run track.  But it is in her primary sport of swimming that she excels.

Zimaya is a tenth grader at the School for Health Professions at Townview and a member of the swim team at her home campus, Lincoln High School. She recently turned heads at the UIL District 12-5A Swim Meet, outperforming her competitors with a time of 30 seconds in the 50- meter race, her signature event. Combined with a victory in the 100-meter, the performance made her Swimmer of the Meet, and qualified her for UIL Regionals, where she pit her solo skills against a broader field.

Lincoln swim coach Teno Myles attests to Zimaya’s natural ability and says she’s a passionate competitor, always looking to improve. A mishap with her goggles at the 2019 district meet cost her the win, but Myles said she regrouped and was determined to come back stronger this year. Coach Myles credits that determination, a can-do spirit, and a willingness to embrace the challenge for her success. Zimaya stands out as a successful female African American swimmer.

“A lot of kids can swim,” said Myles, “but we really have to work with our kids to develop them to swim competitively.” That is a goal for the South Dallas school, which Myles said has a focus on giving students more athletic options.

Zimaya says she’s happy when she’s swimming and encourages other youth to give the sport a try.

“Go for it,” she says. “You never know; you may get used to it and like it. And when you compete, people look at you, notice you.” 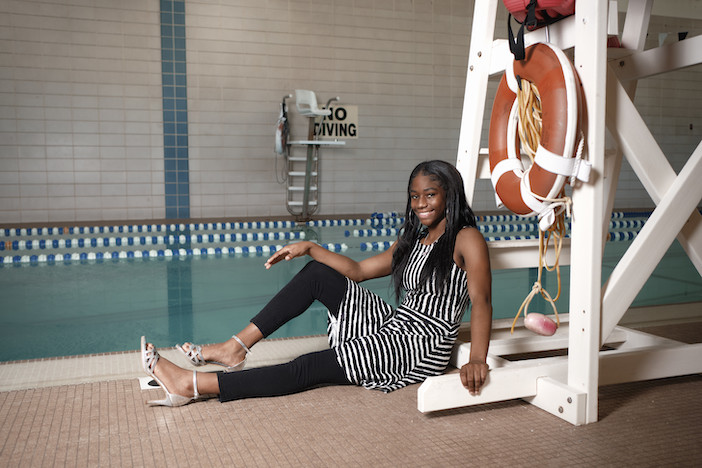 She says she’s focused on her sport as a means of earning a full scholarship to attend college, where she hopes to study veterinary science or zoology.

The teen’s proud mother, Kimberly Smith, a Lincoln alum who played on winning Tiger basketball teams as a student, says Zimaya was a natural in the pool from the time she took her first dip at the age of four.

“She was never afraid of the water,” she said. “We never pushed her to swim competitively. I just wanted her to learn early since it’s easier for them at a young age.”

These days, Smith says her greatest challenges as the mother of a promising athlete are ferrying Zimaya to and from events and practice and helping her manage her study schedule and diet. The mom is grateful to both schools for their cooperation at facilitating Zimaya’s participation in meets and helping to keep her current on her studies, a top priority for the honor roll student.

Both Smith and Coach Myles have great praise for the support Zimaya receives from the community, including the staff of Park South YMCA, where she started lessons as a pre-schooler and still practices today. In fact, they say an early team of young swimmers formed by the Park South Y staff helped build Zimaya’s stamina and confidence in the pool. Myles also says that Paul L. Dunbar Principal Alpher Garrett-Jones played a mentoring role in developing Zimaya when, as principal of Charles Rice Learning Center, Garrett-Jones created an elementary swim team to encourage young swimmers to develop their skill.