In a matter of days, the students and staff from the displaced campuses were reassigned to existing Dallas ISD buildings. Walnut Hill Elementary moved operations to Tom Field Elementary School. Students from Cary Middle School were split into Franklin and Medrano middle schools. And Thomas Jefferson High took over the Thomas Edison Learning Center complex.

One year later, Thomas Jefferson High School principal Sandi Massey recounts the accomplishments that her students and staff achieved during a difficult period.

Tell us about the progress that Thomas Jefferson has accomplished this year.

“It was really chaotic at the beginning and we were just trying to organize to get everything ready. Despite the overwhelming support, our new campus was still lacking resources. We had also taken an emotional hit, we had lost instructional and physical items, and we knew that that was going to be hard.

Our scores were really low during the six-week grading period that followed the October tornado. We felt that we hit rock-bottom, and we focused on going up, up, up.

The next four six-week grading period – right after January – was the most instructional six-weeks we’ve had to date.

It was the highest six-weeks score we’ve averaged in years. We were on a scale moving up, our scores were higher in every category, except for English. It was the only area that was barely below the year before, but we exceeded the score for every other area compared to the year before.

We already had great structures and we already knew what we needed to do to be successful, before the tornado hit. Once everyone got over the initial shock and decided to get into the swing of things, the swing was already there. We didn’t have to reinvent the wheel. It was just putting things into practice that we already knew, and that made it that much easier for us.

How did you handle the transition with your staff?

“It was such a hard time. Everybody was hurt and had really taken the loss of their home so personally. A lot of our staff members had to travel more to work than they were used to, and those small things just compile to the emotional trauma that they were already going through. It made it very challenging as a leader to figure out how I could help them to take some pressure off.

We had snacks every single day, and there wasn’t a single day that there wasn’t food on-campus. Whether something was donated, or I just went to Costco and paid it out of my own pocket. We kept snacks, and that tradition stayed with us to this day. Simple things like that helped.

I also made a real distinct decision to do professional development, not so much instructional but social and emotional or leadership-mindset focused. I did several different sessions, one of them was about finding your compass, and every staff member got a little key-chain compass. Those little sessions allowed us to learn together, to cry together and to share among us that we got through another day and that we can do this and that we’re not going to quit.”

How did Dallas ISD and the Dallas community helped after the tornado?

The Dallas Education Foundation has been incredible. They’re buying a new outdoor classroom for Edison, they’re taking care of the greenhouse and restoration. There’s just so much that they’re done along the way and I’m super grateful for them.

The TJ Alumni Association has raised thousands of dollars for us. They single handedly took care of student uniforms for the entire school year. 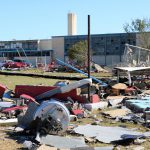 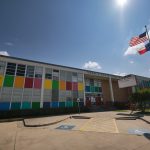 Fidelity has been our partner for the last four years and they have come to our campus every single year to freshen up and make the TJ campus look better. Last October, they were in the TJ campus on the 19th, one day before the tornado hit. They have done that every year, and this year we have approximately 30 benches for our courtyards, they sent tie-dye t-shirts for the entire school staff and student body. That partnership has been awesome.

But I’m most grateful for the support of all our students who have chosen to stay at TJ. It’s not easy to travel to a school that is further away than you ever imagined your home school would be; to sit in a middle school that doesn’t really have all the bells and whistles of a traditional high school. There are 1,600 students that have stayed with us, and are going to hopefully fight through these challenging times and be with us until the very end and make it back to the new Thomas Jefferson High School.”

What do you celebrate on this anniversary?

It’s been a strange year. COVID-19 has been the heavy lifting in place; trying to figure out online-learning and face-to-face, and getting kids engaged, and getting teachers to feel comfortable and safe. It seems just as challenging as going through the tornado.

But truthfully, what’s there to celebrate is the mentality that the tornado gave us. It gave us a sense of strength and resilience and get-through-it-ness. We were able to toughen up and show that we’re not going to give up. We’re not going to quit. We’re going to cry a little bit and we’re going to move forward.

I think that we proved on the four six-week scores that that’s what we do. So, when COVID-19 hit, it was hard, but we’ve been through worse. So we gear up and move forward, and that is truly something to celebrate. That the tornado gave us a stronger, thicker mentality that we have used to help us get through this new reality of COVID-19 easier. Our teachers are really not sitting back complaining, but figuring out what’s the next thing we’re going to try.”