October is National Principal Appreciation Month, and Dallas ISD celebrates the 225 dedicated principals who continue to lead their schools through challenging times to ensure that all students are educated for success. Thank you, principals!

Marlon Brooks’ almost 29-year career as an educator is full of accomplishments, including being one of the longest-serving principals in the district.

But in the eyes of the L.G. Pinkston High School principal, it’s not accolades or promotions that stand as the most remarkable milestones of his long tenure in Dallas ISD.

“Being a principal is one of the most outstanding career opportunities one can have because you can meet people, students, from all walks of life and lead them to develop and grow into adulthood,” he said.

Brooks began his career as an educator with Dallas ISD in 1992 and has been a teacher, an assistant principal and a principal at a variety of schools with diverse student bodies throughout the district. Notably, the Louisiana native has been principal at Skyline High School—Dallas ISD’s largest secondary campus—and at schools where students need a different approach to guide them to academic success—Barbara M. Manns, Maya Angelou and John Leslie Patton.

“Mr. Brooks is an outstanding Principal that consistently works to serve his students, community, and all stakeholders in order  to ensure their success,” said Salem Hussain, executive director for secondary schools in the W.H. Adamson, L.G. Pinkston, Sunset and Moisés E. Molina high school feeder patterns.

In 2011, Brooks was tasked with sunsetting A. Maceo Smith High School and transitioning most of its students to the new Wilmer Hutchins High School. In his second year as principal of Pinkston, he is once again in charge of a major transition as plans are under way to build a state-of-the-art campus for West Dallas in partnership with Toyota and Southern Methodist University.

“Challenges are all a matter of perspective,” Brooks says. “Never, has any day at any of the schools I have been not been enjoyable for me. It’s all about following a system—a mission, vision, goals and expectations—that will help students and their communities grow.” 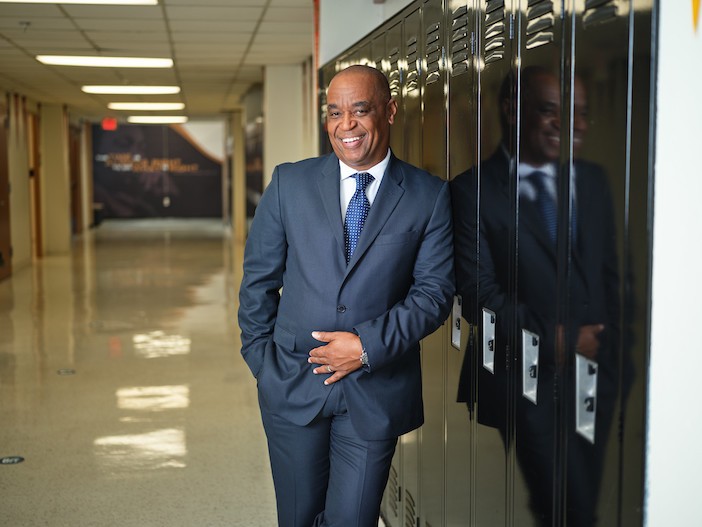 Brooks attributes his success as principal to the talented teachers and staff he has worked with and to the support of the administration. Gaining the trust of the community he serves and their collaboration also has been a factor.

He feels privileged to be part of West Dallas as Pinkston principal because he believes that despite the image that some may have of the area, he knows it to be a place of unbridled potential, and Pinkston as the source of those who will lead the way. The campus housing seventh through 12th grades is an asset in his eyes—students get used to the cultural platform and high expectations earlier.

“It is our job to make sure that we are the premier educational institution that [West Dallas] deserves,” Brooks said. “West Dallas is an opportunity goldmine. As economic investment grows in the area, we need to provide educational opportunities that match or exceed that growth and prepare our students to compete in the global market by tapping the cultural diversity we find in West Dallas.”

Through the years, Brooks has amassed a wealth of experience, and his advice to principals who are starting their careers usually includes:

In the initial meeting Brooks had two years ago with the panel of teachers, community members, and parents formed to help choose a new principal for Pinkston, “I told them what I bring to the table, but I asked them to tell me what they needed from me,” he said. “I wanted to engage in a sense of teamwork so we could together reframe the vision for Pinkston and West Dallas to be successful. I’ve had nothing but support.”