Harvey Martin’s path to NFL stardom quietly began at South Oak Cliff High School as a member of the first racially integrated class in the city of Dallas. 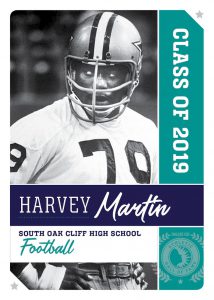 A two-year letterman, Martin picked up pads for the first time in his life as a high school junior and quickly adjusted to the game of football as he moved to the defensive side of the ball and led the team deep into the state playoffs his senior season. Despite his success on the gridiron, Martin fielded only one scholarship offer as he enrolled at East Texas State in Commerce, Texas.

Martin flourished at East Texas State and developed into a dominant defender as he was selected an Associated Press Little, Football News and NAIA All-American en route to leading the Lions to a national title as a senior in 1972. He completed his career as a two-time All-Lone Star Conference performer in 1971 and 1972.

The Dallas Cowboys took notice of Martin’s talents and selected him in the third round of the 1973 NFL Draft. After four years in the NFL, Martin began to blossom into one of the top defenders in the NFL as he appeared in his first Pro Bowl after the 1976 season before leading the Cowboys with 85 tackles and 23 sacks in 1977. Also during the ’77 campaign, Martin led the Cowboys to a Super Bowl XII Championship and was named the game’s co-MVP. Martin was also named the league’s Defensive Player of the Year and earned All-Pro honors.

Martin would go on to appear in two more Pro Bowls and received All-Pro honors in 1978 and ’79 before his retirement in 1983. Prior to his retirement, Martin took advantage of his popularity and was an entrepreneur in addition to serving as a local TV and radio personality in the area.

In 1987, Martin was named to the Lone Star Football Conference Hall of Fame and entered the Texas Sports Hall of Fame in 2009. In 2007, Martin was selected to the Lone Star Conference 75th Anniversary Football Team and was named LSC Defensive Player of the Decade for the 1970’s. In addition, he earned first team defensive lineman honors for the LSC Football Team of the 1970’s and was selected to the LSC All 25-Year Team, where he was recognized as the Best Defensive Player and a first team defensive lineman. Martin also had a collegiate classic football game played annually in Dallas named after him.

Martin passed away from pancreatic cancer in 2001 in Grapevine.  Over a thousand friends, fans, and family said goodbye at Prestonwood Baptist Church in Plano.

Martin will be among the Dallas ISD Athletic Hall of Fame Class of 2019 inductees celebrated at the induction ceremony on April 26 at the Sheraton Dallas Hotel.