A two-sport letterman at Bryan Adams High School in football and track & field, Doug English was a standout defensive lineman for the Cougars. As a senior, a late growth spurt along with spectacular play on the gridiron caught the eye of the University of Texas coaching staff. An all-district performer for a team which finished 9-1 in 1970, English parlayed that success into a scholarship offer from the Longhorns. 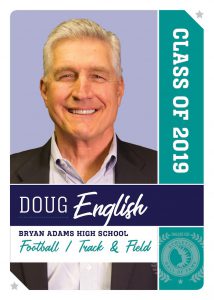 Once English arrived in Austin, he continued to grow into a dominant force as he earned All-SWC honors following a pair of Southwest Conference (SWC) titles in 1972 and ’73. He capped off his career in fine fashion following the 1974 campaign with a spot on the UPI/AP All-American team in addition to earning team MVP honors.

English is an advocate for spinal cord research with his involvement in various foundations over the years and has also designed a piece of football training equipment called PowerDrive. English will be among the Dallas ISD Athletic Hall of Fame Class of 2019 inductees celebrated at the induction ceremony on April 26 at the Sheraton Dallas Hotel.

Become a CDL bus driver with Dallas ISD and make a minimum hourly rate of $22.69 per hour