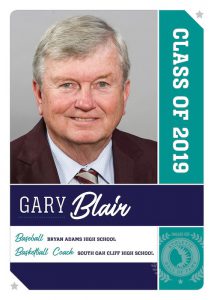 Gary Blair currently serves as the head women’s basketball coach at Texas A&M University, where he has won a national championship, and is the most successful head coach in university history and a member of the Women’s Basketball Hall of Fame.

Before he cut his teeth on the hardwood, Blair was a standout all-city baseball player at Bryan Adams and lettered at Texas Tech. He also served his country with a stint in the U.S. Marine Corps before returning to Dallas as the inaugural head coach of the South Oak Cliff girl’s basketball team.

In his seven seasons at South Oak Cliff, he set a state record with five consecutive state tournament appearances and a 239-18 record. His teams won three State Class 4A Championships, in 1977, 1978, and 1980.

Blair will be among the Dallas ISD Athletic Hall of Fame Class of 2019 inductees celebrated at the induction ceremony on April 26 at the Sheraton Dallas Hotel. Blair is excited to be inducted with one of his star players–and friends–Barbara Brown McCoy.