Two years after Solar Preparatory School for Girls opened at the former James B. Bonham Elementary School, staff and students celebrated the completion of a 44,000-square-foot addition. 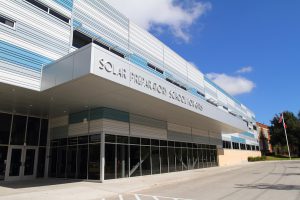 Solar Prep for Girls is on track to be the largest all-girls elementary school in the country, Principal Nancy Bernardino said. The new space will accommodate the growth while enhancing the learning experience for students.

Trustee Miguel Solis said that to him, Solar Prep represents hope. He was a district employee when the tough decision was made to shutter Bonham because of budget challenges. He said the reopening of the campus brought hope to the community, and the level of education students receive inside makes them a bright hope for the future.

Citing a quote from the late Sen. Robert Kennedy, Solis said, “ ‘Some men see things as they are and ask why. I dream of things that never were, and ask why not?’ This is a ‘why not’ academy.”

Afterward, guests were taken on student-led tours of the new space.