“I was only 18-years old,” adds Atkinson, pointing out to a classroom full of Leadership Cadet Corp students at Thomas C. Marsh Preparatory Academy. “And not much older than you guys are now.”

Atkinson addressed some of the approximately 300-plus members of Marsh’s Leadership Cadet Corp after talking with Corporal Miriam Gaytan, who leads the corps, at one of the school’s popular Military Museum open houses. Gaytan thought that Atkinson’s time serving in the war at Omaha Beach and the Battle of the Bulge made him the perfect candidate to speak to the LCC students on the realities of serving one’s country.

“He was so sweet and willing to tell the students about his experience in the war,” Corporal Gaytan said. “It truly is an honor to have him here. There is no better story than one that comes from someone who can tell it firsthand. It’s an honor.”

During Atkinson’s presentation to the cadets, he recounted in vivid detail the feelings of horror, victory, and camaraderie that come with living through war.

“Of my four close friends that I made during the war, three came back paralyzed or handicapped,” Atkinson told students. “And one didn’t make it home at all.”

“What do we call that?” asked Corporal Gaytan to the listening cadets.

“The ultimate sacrifice,” they answered in unison. 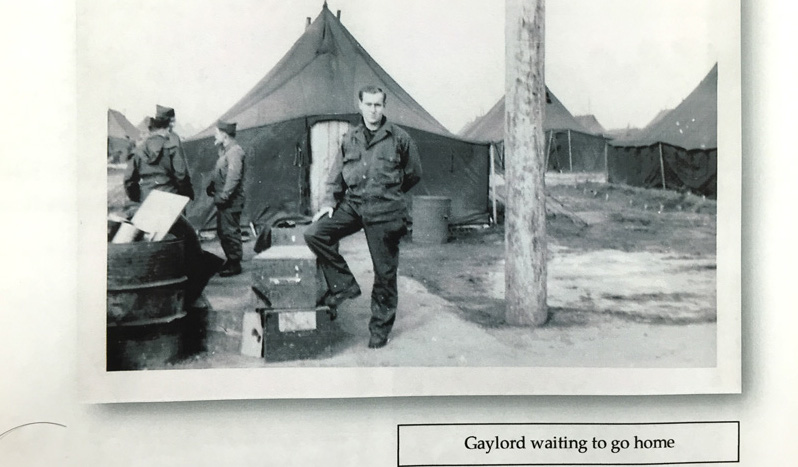 Atkinson’s presentation included showing cadets photos that he took during the war, maps and old letters that he’d sent home.

“Was it hard coming back to live a normal life after being in war?” one student cadet asked during the question time.

“No, not for me,” Atkinson said. “I got home on a Friday and, on Monday, I registered in the University. I did not want to miss my opportunity to go to college!”

After spending four years in the war—starting as a private first class before moving on to become a military policeman—Atkinson studied in Nebraska and went on to have a successful career as a chemist.

“It’s so cool to meet someone who fought against the Nazis,” Cadet Luke Smith said. “It’s like from a movie!”