Students in the Dallas Independent School District made significant gains in fourth-grade math in the 2015 National Assessment of Educational Progress (NAEP), also known as The Nation’s Report Card. Dallas’ gains outpaced those of the nation’s public schools and placed the district among the only three districts to see gains compared to 2013 results in that subject.

Results for fourth- and eighth-grade reading held steady compared to the 2013 assessment. The results for the sampling of eighth-grade students who participated in the math assessment in 2015 registered a decline.

This is the third time that Dallas ISD has participated in the Trial Urban District Assessment, or TUDA. Of the 21 participating districts, Dallas ISD has some of the highest percentages of students who are considered economically disadvantaged.

“The results of the 2015 NAEP are encouraging because they demonstrate that our students are generally headed in the right direction and provide another important measure of student progress,” Dallas ISD Superintendent Michael Hinojosa said. “The results also show us where we need to redouble our efforts and continue growing.” 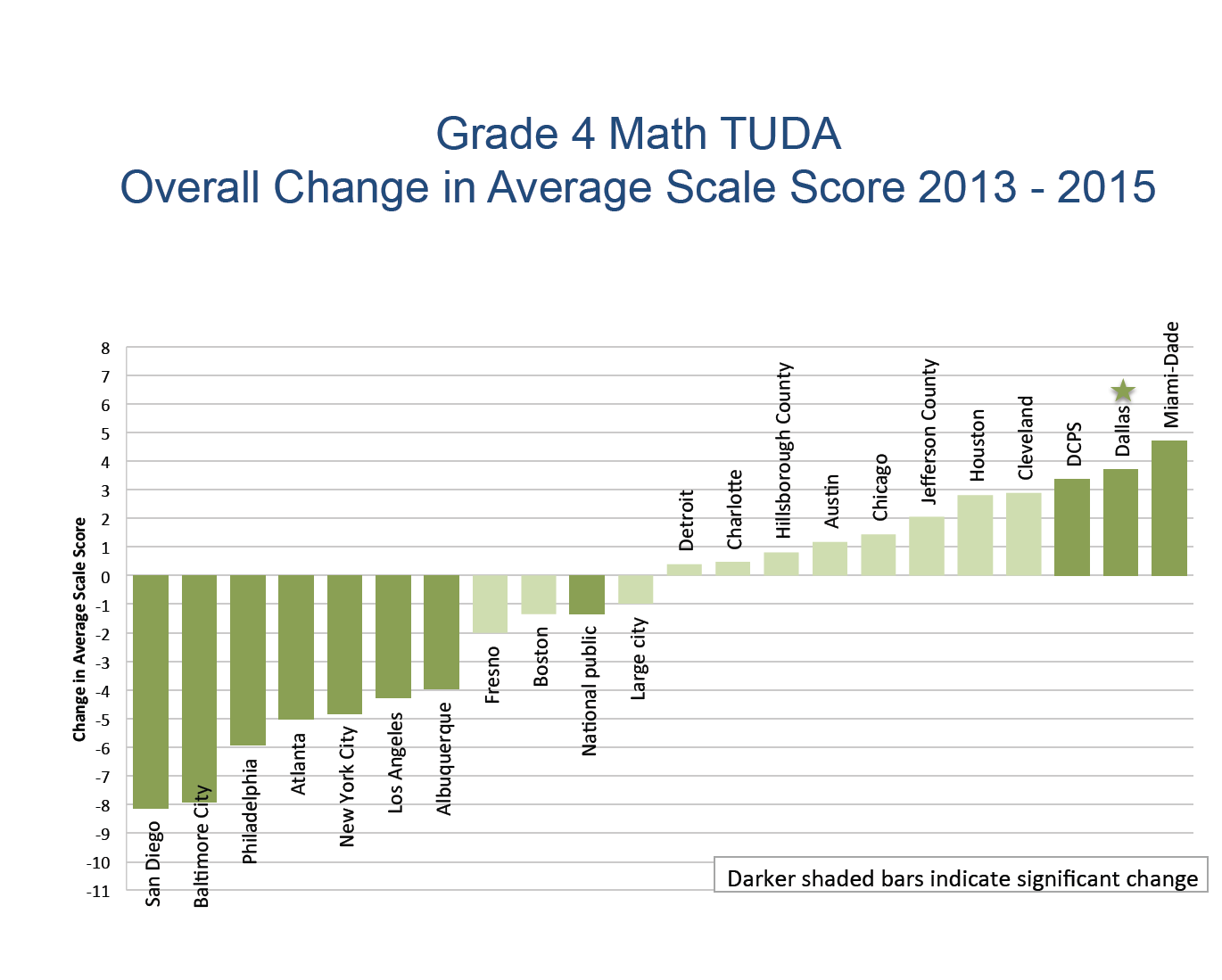 Although Dallas ISD’s eighth-grade students registered an overall decline in the average scale score in math, Hispanic students who participated outperformed their peers in three districts that are demographically similar to Dallas.

While scores in reading for both fourth- and eighth-grade students remained steady, inclusion rates for fourth-grade English language learners went up significantly compared to the 2013 administration, which means that more students who would normally test in Spanish, took the English NAEP assessment.

“The Dallas school district made impressive gains in fourth-grade math that were among the highest of any large city participating in NAEP, and it held its own in other grades and subjects at a time when the national and state numbers often moved downward,” said Michael Casserly, executive director of the Council of the Great City Schools, based in Washington, D.C. “With the district’s new leadership, I am very optimistic about the trajectory of the city’s school system’s academic programs in the years to come.”

The NAEP is known as The Nation’s Report Card because it is the only nationally representative assessment of what U.S. students know and can do in core subjects such as mathematics, reading, science and writing. It reports on student achievement at the national and state levels and 21 selected urban districts. Districts that participate in the 2015 TUDA include New York, Los Angeles, Chicago, Houston, and Austin. In 2015, 279,000 fourth graders and 273,000 eighth graders took the assessments, which were administered between January and March.