Editor’s note: During Dallas ISD’s Winter Break, The Hub will take a look back at some of the best and most popular stories. This story was originally published on Nov. 19, 2014.

With the eighth consecutive unqualified opinion from an external audit and a record amount in reserves, the financial condition of the Dallas Independent School District has never been stronger.

The district’s most recent financial audit, performed by the auditing firm of Deloitte and Touche was presented today to the Internal Audit Committee. The audit is considered a clean, unqualified opinion from the auditors and, for the second year in a row, there were no material weaknesses identified.

Dallas ISD closed the 2013-14 school year with a record amount in its fund balance: $342 million, up from $37 million in 2007-08. A rising fund balance and consecutive clean audits signal that the financial issues experienced by the district six years ago are history.

“Dallas ISD is stewarding taxpayers’ money wisely. We have taken major steps forward during the last few years to improve our financial condition and operation,” said Mike Miles, superintendent of schools. “Our financial team has done an outstanding job in putting in place strong internal controls that align with state practices. The team’s careful management of district resources has put us in position to be in the best financial condition in school district history.”

Dallas ISD’s financial operations have received several noteworthy honors during the past year. The district received a Superior Achievement rating from the Financial Integrity Rating System of Texas (School FIRST), a certificate of Achievement for Excellence in Financial Reporting and the Distinguished Budget Presentation Award from the Government Finance Officers Association and a Certificate of Excellence in Financial Reporting from the Association of School Business Officials. In addition, Dallas ISD Chief Financial Officer Dr. James Terry was named the 2014 Government CFO of the Year by the Dallas Business Journal.

“The district’s financial strength has given us flexibility to make the best use of our reserves by serving as a sort of collateral to access funding programs,” said Terry. “Having a stronger financial position allows us to start addressing some of our pressing facilities needs now, rather than waiting for our next bond program. Our efforts during the last few years to be fiscally responsible are paying off for our schools.” 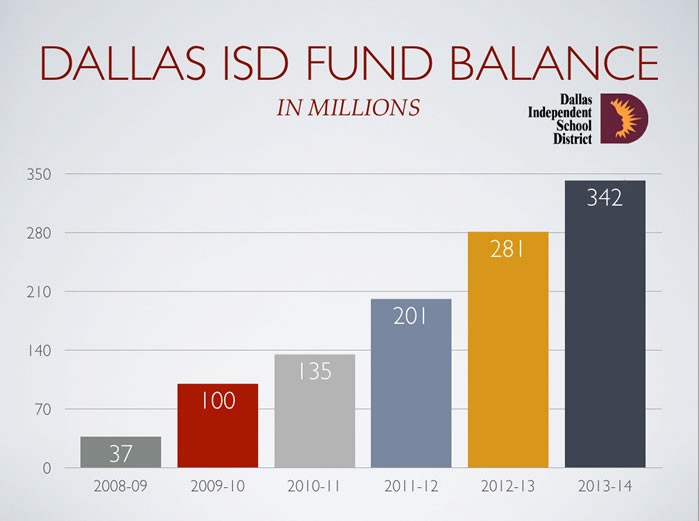