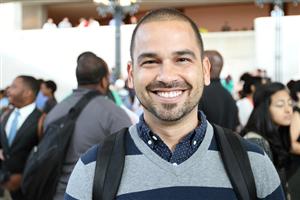 The Dallas Independent School District began the 2014-2015 school year with a record number of filled teacher vacancies. Michael Latorre-Quevedo is one of the more than 900 teachers new to the area, among 2,000 teachers overall, hired in the district this school year.

But just one year ago, Latorre-Quevedo could have been found helping shape the minds of students in Puerto Rico, where he has taught at both the elementary and secondary levels. Thanks to a friend who told him about an opportunity to teach in Texas through the Dallas ISD Alternative Certification Program, Latorre-Quevedo now calls north Texas home.

“I actually applied 10 years ago and didn’t get in [the district], but I went to San Juan [Puerto Rico] to interview,” said Michael Latorre-Quevedo. “ Since I had a master’s (degree), I was looked at closely, and I was told what I needed to do and now I’m here.”

“Coming to Dallas was very smooth, but there’s been a lot of training since June,” Latorre-Quevedo said. “Now it’s the end of the second day and I’m ready to pass out.”

While here, he plans to complete his doctorate in Hispanic studies and eventually join the Dallas ISD leadership team.