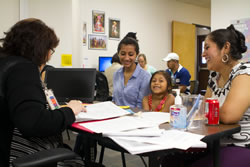 For children new to the United States, the first step in the process of becoming a Dallas ISD student puts them in a safe environment surrounded by smiling faces.

In its second year, the Margaret and Gilbert Herrera Student Intake Center assesses immigrant children and registers them for school. As of last week, the center has aided more than 1,000 families since July. Many families arrive at the center after being referred by the schools in their new neighborhoods.

Marlene Yépez-Porras, parent/community liaison specialist, has been with the center since it opened last year.

“We believe it’s something that’s very important,” Yépez-Porras said of the center. “In the fact that it’s only for immigrant families, they do not know what the system is like, they do not know who they are going to encounter. Having a friendly face, being able to answer their questions, to welcome them.”

On a recent Friday, the daughter in the Molina family couldn’t stop returning those smiles. The elementary student was with her aunt, who attends high school, and her parents.

Two of three children in the Macias family are new to the country from Mexico and are both in secondary schools. They were looking forward to the learning environment here, which is brighter and more inviting than in the schools they left behind – and is also air-conditioned (another positive for them).

The boy in the Rivas family is attending elementary school. He said he is looking forward to going to school to learn (and learn English) and enjoys playing soccer.

Besides helping students find their bearings in American classroom, the center supports families through English as a Second Language programs and by providing information on helpful resources. The support begins right away during what can be an intimidating and confusing time.

“Sometimes we share tears,” Yépez-Porras said. “You bond a little.”