Coming off a big year in sports for Dallas ISD, we are excited to be sending a few of our varsity football teams to the UIL Football Playoffs. “Congratulations to each of our nine teams that made the UIL State Football Playoffs,” said Dr. Silvia Salinas, executive director of Athletics. “We are excited for our coaches and players who have worked hard all season to make a run in the postseason.” 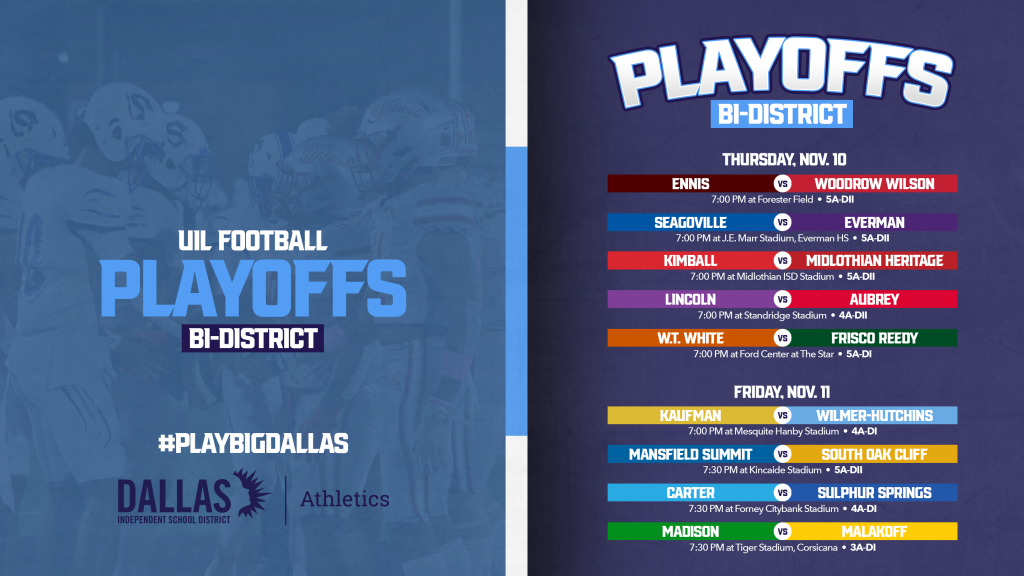 The reigning UIL Class 5A Division II State Champions, the South Oak Cliff Golden Bears, secured their spot in the playoffs and were named District 6-5A, Division II Champions.

Dominating the rest of the district and taking the remaining three spots to advance are the Woodrow Wilson Wildcats, the Seagoville Dragons, and the Kimball Knights.

Representing Dallas ISD in District 7-4A Division I will be the Carter Cowboys and Wilmer-Hutchins Eagles.

Dallas ISD will also have the Longhorns at W.T. White from District 5-5A Division I competing, the Lincoln Tigers showcasing their grit in District 6-4A Division II, and the Great James Madison Trojans holding down the fort in District 7-3A Division I.

Four of the nine teams advancing are under the leadership of first-year head coaches: John Fish from Woodrow Wilson, Stephen Jackson from Seagoville, Brandon “Bam” Harrison at Kimball, and Kenchee Ross at W.T. White.

“We hope we can hoist another championship trophy in December,” Salinas said.