When Dallas ISD found itself at the epicenter of the U.S. Ebola health scare last fall, a core group of dedicated staff members throughout the district rose to the challenge and addressed the situation — calmly and compassionately, with student safety as their top priority.

In the wake of the news that five of our students had been exposed to the Ebola virus, the district faced questions from concerned parents and 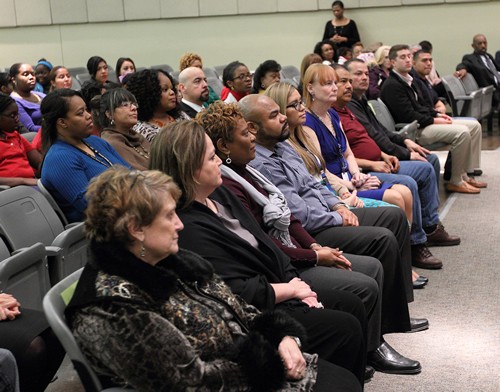 community members, the national and local news media, the medical community and government officials. With no modern precedence in the U.S. to look to for guidance, district leaders, school principals, nurses, counselors, psychologists and maintenance staff led the response.

“While much has been made of the heroic work of the first responders, doctors, nurses, and local, state, and national agencies in responding to Ebola, I believe that our staff members at the impacted campuses and in our central administration who responded to this crisis are the unsung heroes,” said Miles. “Their tireless effort on behalf of students, staff and community was largely out of the public eye, but the work they did in the early days of the crisis and the weeks and months since then, without a doubt, helped guide Dallas through one of its most trying times.”

In addition, a reception is set for Monday, Feb. 9, at the generously donated Crow Collection of Asian Art to further demonstrate the Superintendent’s gratitude to these individuals for their exemplary service to the students and community of Dallas ISD.

See photos of the awards presentations.