Rewarding effectiveness. That’s the purpose at the heart of the Dallas Independent School District’s Principal Evaluation System, which is the first of its kind ever initiated in a large urban school district. The new system came to fruition this week as Dallas ISD principals were notified of their 2014-2015 salary based on their performance under the new appraisal system. The new evaluation structure has transformed the way campus leaders are compensated. Overall, 126 returning principals this school year will each receive a pay increase of $10,000 annually, based on their performance.

“Our new principal evaluation system is groundbreaking, transformative and it’s about getting results,” said Superintendent Mike Miles. “When more than half of our school leaders are rated as proficient under such a rigorous system, this means they are excelling at both instructional leadership and student academic achievement. We want to align compensation to match performance and build a rigorous system that develops quality leaders, quality instructors and supports a quality education for our students.” 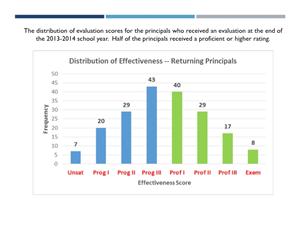 Notably, the new system is being called one of the most rigorous principal evaluation systems in the country. Dallas ISD principals are being rewarded for leadership and improved student achievement that is tied to on-the-job performance. More than half of Dallas ISD’s 193 returning principals scored “proficient” or better on the district’s new Principal Evaluation System.

The principal evaluation system, approved by the Board of Trustees in 2013, takes into account six key areas: the performance rubric, system review, improving teacher effectiveness, congruence between teacher performance and student achievement, student enrollment or student attendance and results of a parent climate survey. Student achievement data accounts for 40 percent of a principal’s effectiveness score.

Miles believes Dallas ISD is continuing on its path to improvement and investing in people by recognizing the impact of quality leadership in school educational administers.

“We said we were going to do build a rigorous principal evaluation system and we’re doing it,” Miles said. “School principals are the key levers to improvement and it is our goal to ensure that every campus has an effective principal. Part of the way we do that is by rewarding principals for performance. By making our system more rigorous, we can continue to help develop and train our principals to improve overall school performance.”