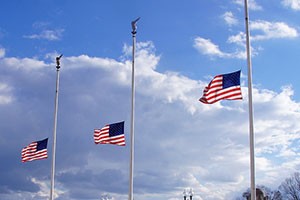 Thursday, September 11, 2014 marks the 13-year anniversary of the 9/11 terrorist attacks on the World Trade Center in New York City, the Pentagon, and United Airlines Flight 93 which crashed in suburban Pennsylvania. Patriot Day serves as a remembrance of the lives lost on that September morning.

On Patriot Day, the President directs that the American flag be flown at half-staff at individual American homes, at the White House, and on all U.S. government buildings and establishments, home and abroad.