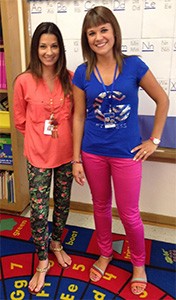 It’s no easy task for a teacher to keep her skills when moving from her native country to another one thousands of miles away. But that’s what teachers Sonia Medina Rodriguez and Silvia Lozano Rodriguez, originally from Albacete, Spain, have done. They are two of more than 60 teachers from Spain who have decided to take a leap of faith and travel to Texas to teach for the Dallas Independent School District.

“In the beginning, it’s a little difficult because it’s different than Spain,” said Medina Rodriguez. “You’re far from your family, your friends and everything is new, but then things begin “to get better and it becomes a positive experience.”

Medina Rodriguez has been teaching for a year at Anson Jones Elementary, under a three-year program that brings teachers from Spain to teach for Dallas ISD. She first learned about the program from her sister, who had participated previously. She visited her sister, liked what she saw, and decided that it was a good opportunity for her.

She says that her experience teaching in the district has been a good one, both professionally and personally, but says that it may take a little time for new teachers to adjust. “The educational system is very different (in Spain),” she said. “For example, classroom observations are something that is not commonly done, and it could make you nervous at first.”

Lozano Gonzalez first heard about the program through Medina Rodriguez. “Sonia was already here and she told me about the people, the environment and everything, and I liked what I heard,” Gonzalez said. She has been living in Dallas since July, and acknowledges that it will take a little time to adjust to the way things work here. Her enthusiasm to teach shows, as her classroom is colorful and full of learning opportunities.

Medina Rodriguez has some advice for new Dallas ISD teachers from Spain. “In the beginning, it is different and you may feel a little tired because you work more hours, but in the end, you are able to accomplish a lot,” she said. “It’s a good learning and life experience.” Her positive attitude and passion for teaching is evident in her enthusiasm the first week of school. “The children are special and watching them develop little by little gives me much satisfaction.”